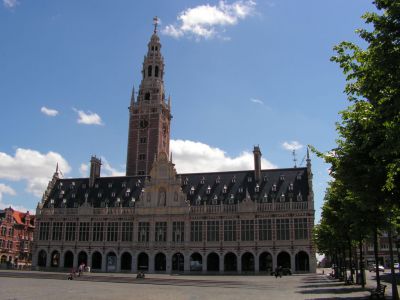 The University Library was designed by the American architect Whitney Warren in a neo-Flemish-Renaissance style, and built between 1921 and 1928. Its monumental size is a reflection of the Allied victory against Germany, and it is one of the largest university buildings in the city. The library's collections were rebuilt with donations from all around the world, outraged by the barbaric act which it had suffered.

In 1940, during the second German invasion of Leuven, the building largely burnt down, including its 900,000 manuscripts and books. The blaze is thought to have started in an exchange of fire between the two armies, rather than a deliberate act. The building was rebuilt after the war in accordance with Warren's design.
Image by Snowdog on Wikimedia under Creative Commons License.
Sight description based on wikipedia