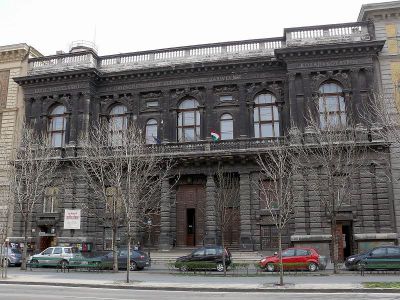 The Hungarian Academy of Fine Art was originally founded in 1871. The building that now stands along the Danube was constructed in 1876. It is located on Pest Avenue, and connects with the City Park. The structure underwent some major construction in 1997, and the work was completed by 1998. The façade of the home of the art school displays some beautiful portraits of Michelangelo, Leonardo da Vinci, and Bramante.

The Academy was started as a school for master painters. Over the years, the courses of study have been expanded to many other areas of art.

On the opposite side of the academy is a Mulberry garden. There are five buildings located here, which are now studios. These studios are used by the students of the school, who study, and can receive a degree in sculpture, painting, graphic design, costume design and restoration, and multi media.

The Hungarian Academy of Fine Arts was founded in 1871. The central building, erected in 1876, is located on the most elegant avenue of Pest which connects the Danube with the City Park. The building was restored to its original beauty in 1997/8. The restoration includes the facade with sgrafitto portraits of Bramante, Michelangelo and Leonardo da Vinci, and also the Rector's corridor and numerous internal decorations.
Image by Attila Terbócs on Wikimedia under Creative Commons License.