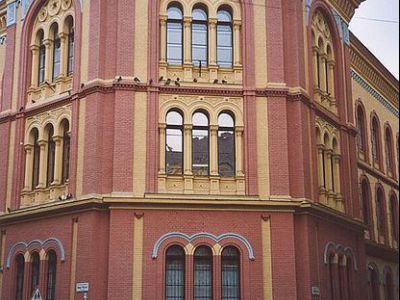 Opened in 1877, a few decades after the first European rabbinical seminaries had been built in Padua, Metz, Paris and Breslau, this institution – formerly known as the Rabbinical Seminary – remains one of the oldest of its kind where rabbis are graduated.

A source of pride for the university is its vast library, considered one of the most important collections of Jewish theological literature outside Israel. Just in time before the 1944 German invasion of the city, the most valuable manuscripts had been brought into an underground safe. Still, an important part of the library was seized by the Nazis and 3,000 books were dispatched to Prague, where Eichmann planned the construction of a "Museum of an extinct race" in the former Jewish quarter. Only in the 1980s were the books discovered in the cave of the Jewish Museum of Prague and brought back to Budapest in 1989.

Despite the anti-religious policy of the Communist government, the institution remained alive. Being the only place of its kind in the Eastern bloc, it had a special mission: students came from all countries of Eastern Europe, from the Soviet Union and even from Israel, to be graduated as a rabbi or cantor. They lived, partly with their families, in small simply furnished boarding rooms.
Image by Cesarzambrano1 on Wikimedia under Creative Commons License.