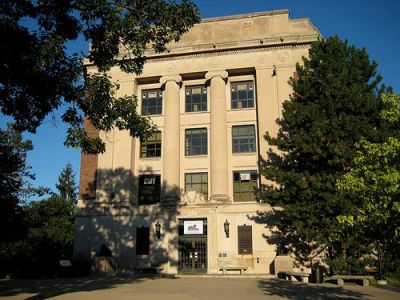 The University of Michigan Museum of Natural History is a natural history museum in Ann Arbor. It is a unit of the university's College of Literature, Science, and the Arts. The museum has 22,000 square feet of exhibit space in a building that it shares with three research museums (Anthropology, Zoology, Paleontology).

The natural history collections began in 1837, and the current building, the Alexander Ruthven Museums Building, dates to 1928. The public exhibit museum was founded in 1956, and today has more than 100,000 visitors annually.

- The Hall of Evolution on the second floor displays exhibits on evolution and prehistoric life, including fossils, models, and dioramas of dinosaurs, ancient whales, mastodons, and other organisms. It is the largest collection on prehistoric life in Michigan.

- The Michigan Wildlife Gallery on the third floor displays exhibits on birds, mammals, reptiles, amphibians, plants, and fungi native to the Great Lakes. There are taxidermy specimens, exhibits on habitats, and displays about regional environmental problems. A mastodon trackway, the largest on display in the world, is part of this exhibit.

- The Anthropology Displays feature exhibits on anthropology, and include artifacts from human cultures around the world.

- The Geology Displays on the fourth floor feature a collection of the several rocks and minerals.