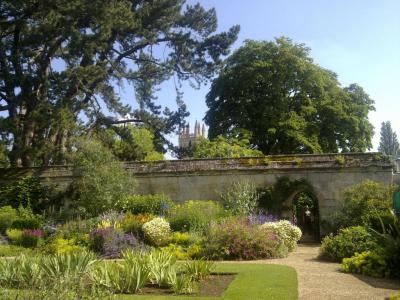 A stroll through the University of Oxford Botanical Garden sitting on the banks of the River Cherwell, to the north east of the Meadow, is something you wouldn't want to miss.

Founded in 1621 as an herb garden full of medicinal plants, this is the oldest botanical garden in the United Kingdom and the oldest scientific garden in the world. Its founder, Henry Danvers, 1st Earl of Danby, was a Knight of the Garter.

The four and a half acres of land on which the Garden lies was once part of a Jewish cemetery until the Jews were driven out of Oxford in 1290. To raise the land above flood level, 4000 cartloads of earth and manure were needed.

There are over 8000 different species of plant-life here, set out in three sections. The Walled Garden, surrounded by the original stone walls, contains the hardiest plants, set in long narrow beds, arranged in botanical order. The oldest tree on display here is the English Yew, dating back to 1645.

The second part of the Garden is given over to the Glasshouses, for the more fragile plants, and it includes the Alpine House, the Conservatory, the Fernery, the Orchid House, the Palm House, the Succulent House, and the Tropical Lily House.

The last section of the Garden, simply called Outside the Walled Garden, was founded in 1947 from the allotments belonging to the Fellows of Christ Church. In this part you will find the Autumn Border, the Bog Garden, the Glasshouse Borders, the Herbaceous Borders, the Merton Borders, the Spring Walk, the Vegetable Beds and the Water Garden.
Image by Ozeye on Wikimedia under Creative Commons License.
Sight description based on wikipedia