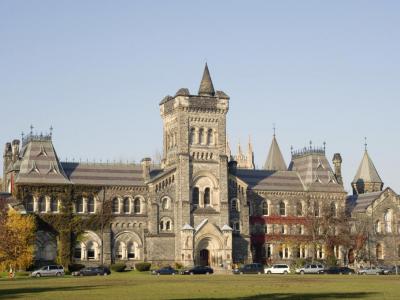 University of Toronto, Toronto (must see)

The University of Toronto is a public research university in Toronto, and is situated on the grounds surrounding Queen's Park. The university was founded by royal charter in 1827 as King's College, the first institution of higher learning in Upper Canada. Originally controlled by the Church of England, it assumed the present name in 1850 upon becoming a secular institution. As a collegiate university, it comprises 12 colleges that differ in character and history, each retaining substantial autonomy on financial and institutional affairs. Academically, the University of Toronto is noted for influential movements and curricula in literary criticism and communication theory, known collectively as the Toronto School. The university was the birthplace of insulin and stem cell research, and was the site of the first practical electron microscope, the development of multi-touch technology, the identification of Cygnus X-1 as a black hole, and the theory of NP-completeness. By a significant margin, it receives the most annual research funding of any Canadian university. It is one of two members of the Association of American Universities located outside the United States.

The Varsity Blues are the athletic teams representing the university in intercollegiate league matches, with particularly long and storied ties to gridiron football and ice hockey. The university's Hart House is an early example of the North American student centre, simultaneously serving cultural, intellectual and recreational interests within its large Gothic-revival complex. The most favorite places for tourists to visit within the University of Toronto are the chapel, the bookstore, the dining hall, the art gallery, and others. During summer there are also guided tours.

Why You Should Visit:
You will not only see historical buildings and fantastic nature, but you can also feel the atmosphere of student life, see busy students and find yourself in a place where everyone is happy to help and share some words with you.

Tip:
Make sure to go inside Hart House, University College, Knox College... all open to the public.
There are also walking tours available around campus. You can start with Philosophers Walk which runs south from Bloor St. across from the Intercontinental Hotel. Eventually, you will reach King's College Circle, a large open area that is the center of the campus.
Image by The City of Toronto on Flickr under Creative Commons License.
Sight description based on wikipedia