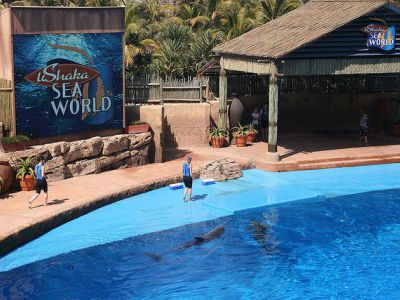 uShaka Sea World is the 5th largest aquarium in the world, with 32 tanks totaling 17,500 cubic meters of water. The underground aquarium is designed around 5 shipwrecks, with its entrance through the above ground "Phantom Ship", which contains several restaurants including the "Cargo Hold," with a wall sized shark aquarium visible from most of the dining areas, and the "Upper Deck," with views of the open sea exhibits that surround the "ship". The dolphin stadium can seat 1,200 visitors, and the seal stadium can seat about 450.
Image by Peter Black2007 on Flickr under Creative Commons License.
Sight description based on wikipedia

Want to visit this sight? Check out these Self-Guided Walking Tours in Durban. Alternatively, you can download the mobile app "GPSmyCity: Walks in 1K+ Cities" from iTunes App Store or Google Play. The app turns your mobile device to a personal tour guide and it works offline, so no data plan is needed when traveling abroad.

The Golden Mile is undoubtedly one of the most prominent tourist attractions in Durban. The wide stretch of beautiful beaches, separated by piers, offers a great opportunity for tourists to enjoy the warm waters of the Indian Ocean. The Golden Mile has always been a popular destination for both domestic and international travelers. Take the following self-guided tour to explore the best Golden...  view more