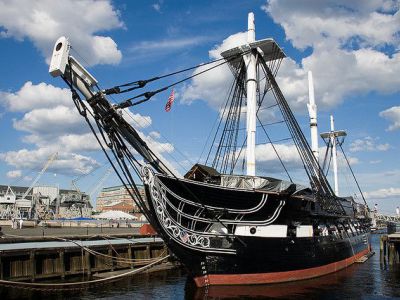 USS Constitution is a wooden-hulled, three-masted heavy frigate of the U.S. Navy which was named so by President George Washington after the United States Constitution. Launched in 1797, this is the world's oldest floating commissioned naval vessel.

The Constitution is most noted for her contribution towards victory in the War of 1812 against Great Britain, when she captured numerous merchant ships and defeated five British warships, namely: HMS Guerriere, Java, Pictou, Cyane, and Levant. The battle with Guerriere earned her the nickname "Old Ironsides" and public adoration that has repeatedly saved her from scrapping. During the American Civil War, the Constitution served as a training ship for the United States Naval Academy.

Retired from active service in 1881, today the Constitution is missioned to promote understanding of and education about the Navy’s role in war and peace effort. As a fully commissioned Navy ship, her crew of 60 officers and sailors are all active-duty Navy personnel whose assignment is considered a special duty. The Constitution is usually berthed at Pier 1 of the Boston Navy Yard (formerly Charlestown Navy Yard) at one end of Boston's Freedom Trail. The privately run USS Constitution Museum is located nearby in a restored shipyard building at the foot of Pier 2.

Why You Should Visit:
To experience all the world's oldest commissioned warship has to offer.
You can't explore quite every nook and cranny, but you can explore most of them with a free guided tour.
The adjacent museum (admission with donation & valid ID) has great exhibits and a gift shop for souvenirs & snacks.

Tip:
While here, visit the Navy Yard Visitor Center and the USS Cassin Young, a WW2 Fletcher-class destroyer.
If you have kids, make sure to go to the museum's second floor for interactive learning experiences.