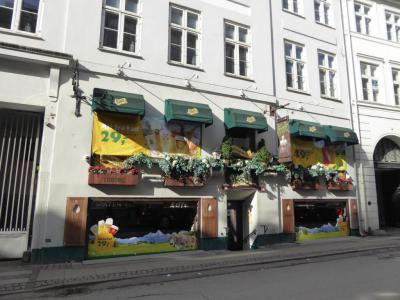 When Hans Christian Andersen first planted his feet in Copenhagen on September 6th, 1819, he stayed at the Gardergården inn on Vestergade #18. In the autobiography of his youth, "Levnedsbogen" (not published until 1926), he describes how, after entering Vesterport, he followed some travelers through Vestergade into Gardergården, where he lived in a small room for the first couple of weeks until he had spent all his money and got on the move again. He was only 14 at the time and knew no one in all the great city, but felt certain he could accomplish his goals here.

Most of the buildings on Vestergade date from the years after the fire of 1795; however, the street has had a long history since the Middle Ages, when it linked Gammeltorv (once the most important city square) with the Western City Gate, serving as the principal entrance road for traffic coming from the west.

Several times in the 1930s, '40s and '50s, the Citizens' Representation tried to make the street wider and more traffic-friendly, but both private individuals and associations have put up a fight and it still carries its distinctive weak curve from Medieval times, having fortunately never seen the large traffic regulation that other areas of Copenhagen did.
Image Courtesy of Wikimedia and Leif Jørgensen.