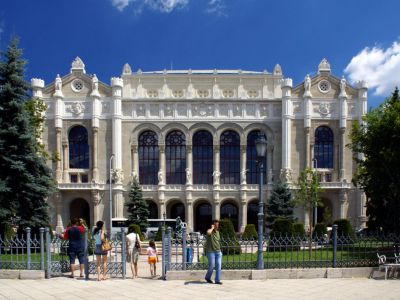 Set in the historic Vigadó Square and fronted by a well-manicured park, the Vigadó Concert Hall is a mid-19th-century building that is actually replacing the original one destroyed by fire during the Hungarian Revolution of 1848-49.

Reputedly one of the finest architectural creations in all Hungary, it features Romantic style with the classic outward projections joined by arcades and the main facade overlooking the River Danube.

Just like its predecessor, the new Vigadó palace was also damaged, and quite severely so, during the Second World War. Its post-war reconstruction took 36 years and remained faithful to the original design, owing to which this musical facility still continues to attract leading conductors and performers from all over the world. Perhaps the most notable regular at the Vigadó Concert Hall is the Hungarian State Folk Ensemble, established in 1951, with a mission to preserve the Hungarian music tradition.

The vicinity of the palace abounds in pretty buildings and cute statues, among which are those of the Girl With Her Dog, William Shakespeare, and the famous Hungarian painter Ignác Roskovics. But the main draw here, undoubtedly, are the views opening out and across the magnificent Danube River towards the Buda Castle and the Chain Bridge, all of which are equally splendid in daylight, twilight or midnight, rendering the square most picturesque and photographically appealing.

The nearby little park, although fenced off, is free to walk in. There are some seats there to be found, so you can take a pleasant break prior to or after completing your evening promenade.
Image by uzo19 on Wikimedia under Creative Commons License.