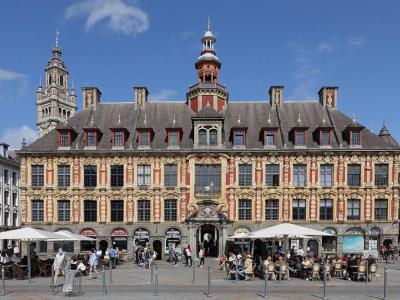 Julien Destree was a master cabinet maker and architect in the city of Lille in 1651. The city had obtained from King Philip IV of Spain a license to build an exchange (bourse) for the merchants of the city. Julien Destree was the man to make it happen. He was determined to create a great monument to commerce to rival the one in Antwerp.

The King had authorized "an exchange...surrounded and encloses 24 houses." Twenty-four plots of land around the market square were sold to traders. Construction of the galleries, paving the courtyard and the four entrances were undertaken by the city. Construction took place under the direction of Julien Destree from 1652-1653.

The building shows a Renaissance Flemish influence prevalent in the 17th century. Piers and columns richly adorned with garlands and horns of plenty are a paen to the commerce of Lille. At the top of the bell tower stands a golden image of the god, Mercury. Lille was in fierce competition with her sister cities, Antwerp, Ghent, and Bruges.

In 1861 the stock exchange opened for business. It was a very modest exchange, not trading much more than 3% of its capital. In 1921 the new stock exchange building, the Chamber of Commerce, was opened. The Old Stock Exchange was indeed the "old" stock exchange.

The Old Stock Exchange is situated by the Main Square and the Theatre Square. It is an important landmark of the center of the city. It consists of a quadrangle of 24 look-alike houses surrounding a large courtyard. The courtyard today is a gathering venue for book stalls, florists, chess players, tourists and visitors.

The Old Stock Exchange can be reached by the Rihour metro station.

Why you should visit
The old building sells a lot of things. Old books, coins, etc. The courtyard hosts games and bookstalls. The building itself is like a voyage back in time.
Image Courtesy of Wikimedia and Gzen92.