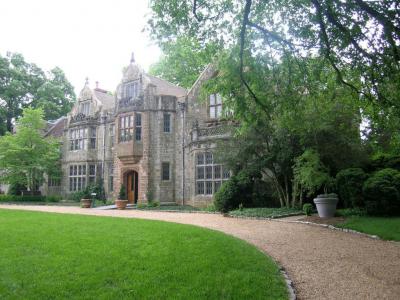 Virginia House is a manor house on a hillside overlooking the James River in the Windsor Farms neighborhood of Richmond.

The house was constructed from the materials of the 16th-century Warwick Priory in Warwickshire, England, and shipped over and reassembled, completed several months before the stock market crash of 1929. Virginia House is in the Tudor architectural style but incorporates a range of designs from other English houses and has modern facilities such as ten baths and central heating.

Virginia House was built by Alexander and Virginia Weddell, salvaging many materials from the Priory and other old English manor houses and adding further elegant English and Spanish antiques, oriental carpets, silks, and silver. Today Virginia House is operated by the Virginia Historical Society as a house museum, although it largely remains as it was in the 1940s during the Weddells’ tenancy.
Image by Jennifer M. Guild under Creative Commons License.
Sight description based on wikipedia