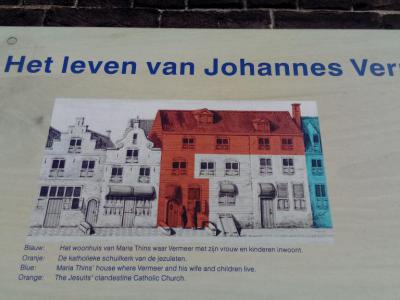 In 1631, Vermeer's father, Reijnier Janszoon, (who in 1640, for unknown reason, adopted the surname "Vermeer") rented a property on Voldersgracht. Here, in a bid to improve his family's financial standing, he started an inn, which he called "de Vliegende Vos" (The Flying Fox). The inn's name eventually proved symbolic, as in 1652 Reynier changed his own first name to Vos.

Municipal records suggest that Johannes Vermeer was born at 26 Voldersgracht in 1632 and lived here, in The Flying Fox, together with his parents until about 1641.

Eventually, Reijnier started dealing in fine arts, too, in addition to running the inn. Perhaps it was due to this fact – surrounded by paintings and artists who came regularly to eat, drink and talk business with his father, that young Vermeer developed passion for painting.

In 1641, when Vermeer was about nine years old, his father's business expanded with the purchase of yet another, much larger inn on Markt (Market Place), named after the Flemish town Mechelen, upon which the family had left The Flying Fox for good.
Image Courtesy of Wikimedia and Donald Trung Quoc Don.