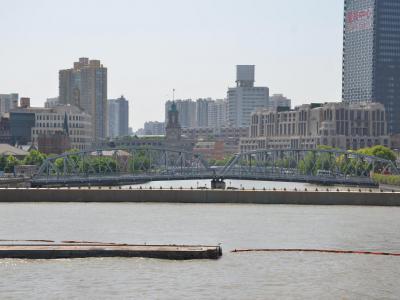 One of the distinctive landmarks of the city of Shanghai, the Waibadu Bridge is the first steel truss bridge built in China. It connects the Huangpu and Hongkou districts at the confluence of the Suzhou and Huang Pu Rivers.

The Waibadu Bridge gets its name from the word in the Shanghai dialect for crossing a bridge without paying. It was funded by a group of European investors led by a British businessman, Charles Wills. At first, its name was Wills Bridge. The steel bridge was completed in 1907. It stands 106.7 meters long and 52.16 meters wide and is the largest bridge made of steel in Shanghai. It was designed by the Singapore based British firm, Howarth Erskine Ltd., and remains the only surviving camelback steel truss bridge in the country.

After 1940, the bridge was repaired and reinforced four times. The last major reconstruction was in 1999 when its strength was increased to sustain increased vehicular traffic and to showcase the bridge as an important tourist attraction in Shanghai. Waibadu Bridge celebrated its centenary in 2007. It was again restored to accommodate both vehicular and pedestrian traffic in 2009. Today, it is fitted with modern LED lighting with flashing colourful lights that make the bridge spectacular at night while reducing electricity consumption.
Image by Creeper-Sleeper on Flickr under Creative Commons License.