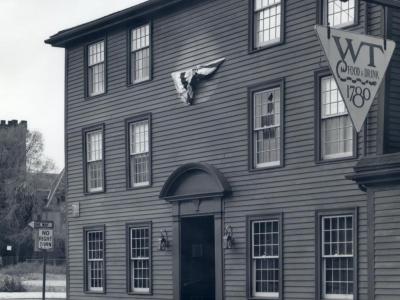 The Warren Tavern is reportedly one of the oldest pubs in the Commonwealth of Massachusetts and one of the most historic watering holes in the United States. It is named after General Joseph Warren, one of the revolutionary leaders killed in the Battle of Bunker Hill, and was founded in 1780. The pub stands in the very same spot where it was put upon foundation, at the intersection of Pleasant Street and Main Street in Charlestown, Massachusetts – just across the Charles River from downtown Boston.

In the early years, the tavern was frequented by many American Revolutionary War heroes, such as Paul Revere, Benjamin Franklin, Sergeant David Turner and George Washington. Since opening in 1780, the legendary Warren Tavern has been closed only for short periods of time. Today, it is a staple for locals much as a popular hangout for tourists who, apart from beer, varied pub food & colonial charm, are also interested in understanding American Colonial history and culture.
Image by Boston City Archives on Flickr under Creative Commons License.