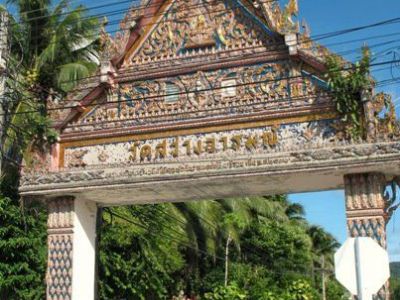 Phuket is one of Thailand’s most famous tropical islands and has a plethora of beautiful beaches that tourists flock to. But it has a lot more to offer in the way of a very rich religious and cultural heritage. Most of its population being Thai-Buddhist, it has around 40 temples, or ‘Wats’, as they are known.

The Wat Sawang Arom is one of these temples, situated in Amphoe Muang, about 500m from the Rawai beach. It is an integral part of the lives of the villagers in Rawai and other nearby villages. It serves as a community center for the people, with an adjoining school whose students include the children who were victims of the 2004 tsunami.

It is a small and simple temple, but has beautiful architecture, mainly depicting the Dharma wheel. It symbolizes the endless cycle of birth and rebirth according to Buddhism. The noble eightfold path taught by Buddha is represented by the wheel’s eight spokes. Buddha image sculpting is practiced here, an art that has been passed down from the Ban Chang Lor school. In addition, the temple walls are covered with paintings portraying the life of Buddha. This Wat is also known to have almost 300 pieces of the collection of Nang Yai, a master of shadow play. It is a must see for any tourist who wants a glimpse into the lives and history of the locals.
Image by Jamie Monk under Creative Commons License.