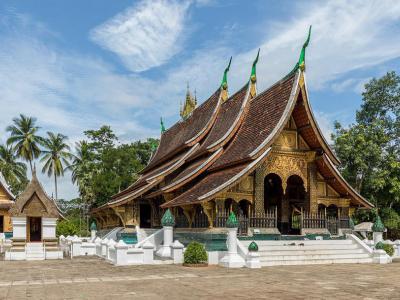 Wat Xieng Thong is a Buddhist temple, located on the northern tip of the peninsula of Luang Phrabang, Laos. It was built in 1560 by King Setthathirath and was under royal patronage during the Kingdom of Laos. Like the royal palace, the wat was placed near the mekong. In 1880, the Tripitaka Library was added and the drum tower followed in 1961. There are several small halls and stupas that contain Buddha images of the period. There is a reclining Buddha sanctuary, which contains an especially rare reclining Buddha that dates from the construction of the temple. In 1931, the image was taken to Paris and displayed at the Paris Exhibition and was kept in Vientiane until 1964, when it returned to Luang Phrabang. At the near compound's eastern gate stands the royal funerary carriage house, which houses the funeral carriage; it stands 12 meters high and there are various urns for members of the royal family.
Image by Mr ATM on Flickr under Creative Commons License.
Sight description based on wikipedia

This sight is featured in a self-guided walking tour of Luang Prabang, Laos within the mobile app "GPSmyCity: Walks in 1K+ Cities" which can be downloaded from iTunes App Store or Google Play. Please download the app to your mobile phone or tablet for travel directions for visiting this sight. The app turns your mobile device to a personal tour guide and it works offline, so no data plan is needed when traveling abroad.

Luang Prabang is the tidiest and most culture-oriented city in Laos. Inhabited for thousands of years, it was the country's royal capital until 1975. The city is known for a plethora of cultural and historic attractions, much as for the abundance of Buddhist temples – wats – including the gilded 16th century Wat Xieng Thong, and Wat Mai, the former residence of Laotian chief Buddhist. To...  view more