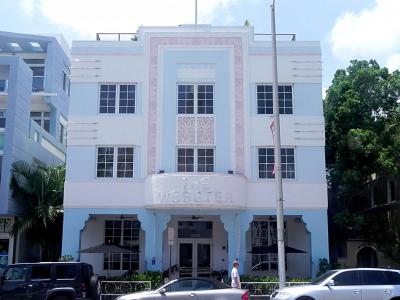 The Webster is another master piece of Henry Hohauser. The Webster perfectly captures the spirit of Miami with its straight lines, ornate carvings, and neon accents. Conforming to Hohauser’s "Law of Three", the building is sliced into thirds both horizontally and vertically, with a trio of windows running across its facade.

It was initially a hotel before became a high-end fashion boutique, with the luxury designer names you’d expect, from Acne to Lanvin. But fear not - you don’t have to be Bill Gates to enjoy it. You can simply order yourself a cup of coffee in the lobby and admire the original polished terrazzo floors, gleaming staircases and pastel-colored decor.
Image by Stefenetti Emiliano on Wikimedia under Creative Commons License.