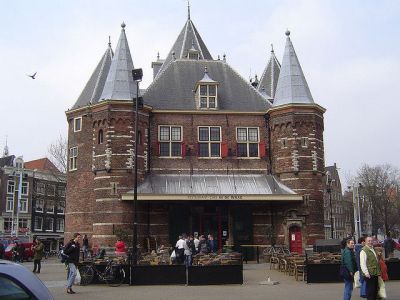 Built in 1488, the Weighing House – or the De Waag in Dutch – was once a part of the city gates built to overlook the surrounding area. Later, in the 17th century, this monumental building was converted to a weighing house.

Originally, the house was much taller than it is today. In the early 16th century, plans of expanding the city limits brought down the wall that once surrounded it. After razing the walls, all that remained was the gate that was no longer useful. The defensive canal and the area surrounding the gate were later transformed into a market square. The ground level was raised, stunting the structure further.

Throughout history, De Waag has housed many guilds and associations, one of which also included the painter’s guild. It is in this building that Rembrandt van Rijn, the famous Dutch artist, was inspired to create "The Anatomy Lesson of Dr. Nicolas Tulp” painting which earned him worldwide recognition. Post the 17th century, the Weighing House served home to many institutions, including two museums and even a fire brigade. It was only in 1996 that the building was taken over by the Waag society which carefully preserved the structure for generations to see.
Image by scalleja on Flickr under Creative Commons License.
Sight description based on wikipedia