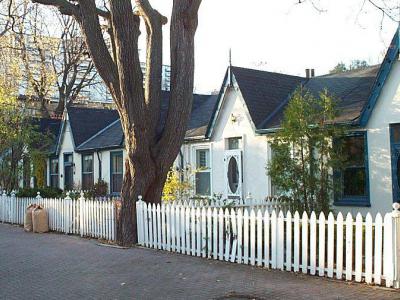 The comely blue-trimmed, white-walled row-houses of Wellesley Cottages laneway emit vibes of a small Victorian village, hidden off the main path, both beautiful and undisturbed. Sometimes referred to as the worker’s or working man’s cottages, this style of properties dominates Amelia Street.

In Ontario, the worker’s cottage became the most common architectural style adopted for small homes following the Crystal Palace industrial exhibition in London of 1851. The presented there housing model, fitted with all of the “innovative” amenities of the day, such as running water, internal sanitation, drafty corridors, and segregated living space, influenced a good number of North American architects at the time.

Built in 1886-1887, each Wellesley property is an idealistic example of the worker’s home: one-storey, narrow lot characterized by a steeply pitched gable facing the street. As a touch of modern trend, the cottages are separated by suburban white picket fences, behind which are tiny front gardens, some in keeping with their Victorian heritage. The cottages were originally 400 square feet each, and were inhabited by employees of a nearby rendering plant, where horses from the neighbouring farms were turned into glue.

A renovation in the 1980s added some 2,400 square feet to the homes without touching their existing front façade, as the heritage laws disallowed such alterations. Thus, the Wellesley Cottage properties remain largely traditional and can be admired for their natural “worker’s” look, featuring original materials, such as wood and stone, and the true forms of the worker’s cottage style. Absolutely charming!!!
Image by Loozrboy on Flickr under Creative Commons License.