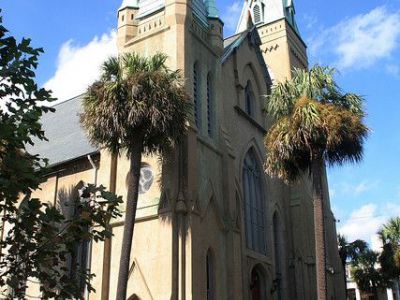 Wesley Monumental United Methodist Church has the distinction of being Savannah's first Methodist church. It was originally established in 1807, and situated at the corner of Lincoln and Oglethorpe until members of the congregation purchased a new space for it on Telfair square. Here, they built Trinity church. When Wesley Chapel closed, the two congregations combined into Trinity Church.

As the congregation grew, they made plans for a new building. They completed the first phase of construction for the current Wesley Monumental United Methodist Church in 1878, but didn't finish until 1890. This was intended to be a monument to two primary Methodist figures, John and Charles Wesley.

The building itself is adorned with stained glass memorial windows, all dedicated to historic Methodist figures. It is constructed in a Gothic architectural style, with tall spires, a 43 foot ceiling, and a magnificent Gothic style organ built by the Noack Company. Fire has threatened the church twice, in both 1946 and 1953. Fortunately, some foresight made sure that the sanctuary was outfitted with a steel ceiling in 1902, so the church's interior was protected from the fire.

Today, Wesley Monumental United Methodist Church stands as a haven for all Methodists, and an enduring monument to key figures in Methodism's history.
Image by rjones0856 on Flickr under Creative Commons License.