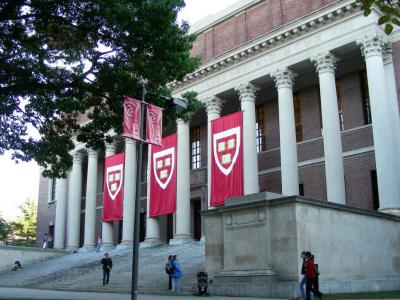 Widener Library has a fascinating and inspiring history. Harry Elkins Widener‍ was a 1907 graduate of Harvard College. He tragically died in the 1912 sinking of the Titanic. Despite being only 27 at the time of his death, Widener had been an avid book collector. He sought out first editions of authors he admired, like Charles Dickens and Robert Louis Stevenson. Widener's will instructed his mother to donate his extensive personal book collection to Harvard.

Instead of funding an addition to Harvard's Gore Hall library, Eleanor Widener funded an entirely new library, which was dedicated in 1915. This massive library encloses 320,000 square feet. The design could be described as Georgian, Beaux-Arts, Hellenistic, or Imperial. The entrance is dramatic, flanked by an impressive set of stairs and imposing columns.

The library houses over 50 miles of shelves and over three million titles. It also has several rare Gutenberg Bibles‍. It is the only academic library among the world's mega libraries. Students are free to roam the shelves. Classes often meet in the reading rooms.

Widener Library was built to be a living memorial to Harry Elkins Widener, and his love of learning, reading, and books lives on at this impressive library.
Image by QuarterCircleS on Wikimedia under Creative Commons License.