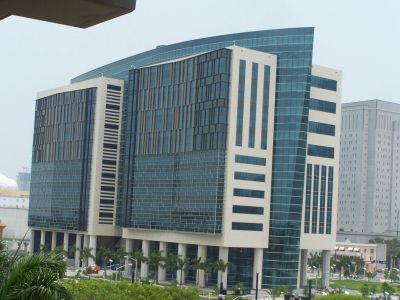 The Wilkie D. Ferguson, Jr. United States Federal Courthouse was designed by the architect firm Arquitechtonica in consultation with Hellmuth, Obata and Kassabaum. The structure consists of two towers connected by a curved glass prism. Each tower has 14 floors and the glass prism contains the waiting rooms and circulation spaces. It has 16 courtrooms and chambers and a separate space for the Clerk of the Court. There are Grand Jury suites, rooms for pre trial services, US Marshal’s Service offices, detention cells and rooms for US attorney, the General Services Administration Services GSA and other support services. The building also has 110 secured and covered indoor parking spaces.

The Wilkie D. Ferguson, Jr. United States Federal Courthouse was completed and began functioning in the year 2005. The design of the building was hailed as an excellent example of green environmentally sensitive architecture. The glass façade is designed to reflect transparency, the integrity of the court and equality before law.
Image by Miami92 on Wikimedia under Creative Commons License.

Miami Beach, a city in Miami-Dade County, Florida, has been one of America's pre-eminent beach resorts for almost a century. Miami Beach is a vibrant area with hip nightclubs, shops, restaurants and other places of interest. Take this walking tour to explore some of the city's most notable sites.

The coastal sunny city of Miami is a world-class destination for tourists, being rich in sights and public venues. Take this orientation tour to explore Miami's heritage.