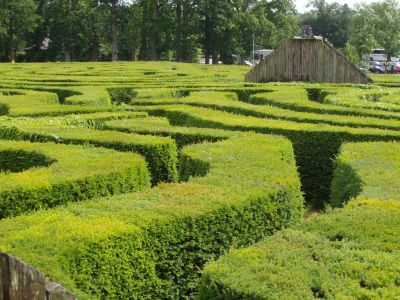 If you want to get lost for a while and then wander, looking for the way out, dizzying yourself with joy which reignites something warm and fuzzy, then you might enjoy a walk through the William Meany Maze on Centre Island.

A storybook icon come to life, this maze was originally a gift to the city from its Dutch-Canadian community, and was created by Peter Vanderwerf, a landscape designer, in 1967. At some point, the maze fell into disrepair and was dismantled. It wasn't until the 2010s that it was brought back to life courtesy of the wealthy businessman, William Meany, originally from the neighboring city of Mississauga, who had a nostalgic affection for the maze that he had known and loved as a young boy, and who donated more than $200,000 towards its recreation after visiting the city in 2012.

Working with the City of Toronto, Meany donated all of the materials necessary to rebuild the maze. The construction started in May 2014 and was completed in September. The precious gift included more than 1,200 black cedars, forming the maze walls, planted approximately 50 meters northwest of the original labyrinth site.

There is something magical about the William Meany Maze that makes you feel like a kid again – and it is quite obvious why it meant so much to Meany. Restored in its original splendor, you can easily spend hours of fun here, totally disoriented, caught in dead ends, going in circles, and ultimately being fooled by optical illusions where what looks like a blank wall turns out to be the right path.

This Toronto Island Park gem is open to the public all year-round, free of charge. Make sure to discover it for yourself, and you won't regret it!
Image by Daderot on Wikimedia under Creative Commons License.