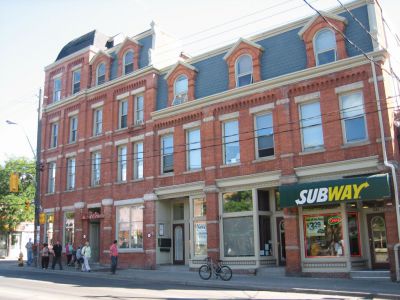 Winchester Hotel is a historic sight situated on the eponymous Winchester Street, which is one of the main arteries of Cabbagetown, Toronto well known for its Victorian Heritage architecture. The most famous building on the street, the hotel, in fact, is rather infamous and was once dubbed "The Bucket of Blood" for being one of the toughest drinking spots in the area. Featherweight boxing champion and local star, Albert “Frenchy” Bélanger, used to work the door here.

Also sometimes referred to as the Lake View Hotel, this imposing three-and-a-half storey red brick edifice, complete with a two-and-a-half storey south wing, features a distinctive Second Empire style. Built in 1888, it adjoins the equally renowned Winchester Hall, erected eight years earlier, and was designed by noted architects Kennedy and Holland who thus contributed a much needed low-rise lodge to the neighbourhood. In 1941, architect Benjamin Swartz oversaw alterations to the hotel’s interior, changing it to fit the tropes of the Art Moderne style.

Back in the days of Prohibition, the Winchester Hotel is said to have been used by Al Capone as the site for arranging alcohol smuggling into the United States. Reportedly, the American gangster even asked to have a staircase built at the back of the building to escape the police if they showed up.

Nowadays no longer a hotel, the place is still opened for business and accommodates various commercial tenants. Among them is the outlet of Tim Horton’s, Canada's largest quick service restaurant chain, specialized in coffee, doughnuts, and other fast food items. The most recent restoration of the building took place in 2005.
Image by SimonP on Wikimedia under Creative Commons License.