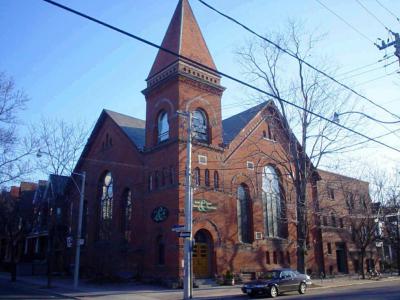 The Winchester Street Theatre is a historic building in Cabbagetown, Toronto. The former home of St. Enoch's Presbyterian Church, this building dates back to 1891, and was created under the influence of architects Gorden & Helliwell. Today it represents one of the few bold examples of Romanesque Revival in the city and only one of its kind in the neighborhood, which makes it an important part of the Metcalfe Heritage Conservation District, both culturally and historically.

Presently, it is home to the Toronto Dance Theatre and the affiliated school of dance, both of which were established in 1968 by dancer/choreographers Peter Randazzo, Patricia Beatty and David Earle. Over the years, the trio have created more than 60 choreographed works, often with original scores by Canadian composers. Described by The Canadian Encyclopedia as "one of the foremost modern-dance companies in Canada", the troupe tours nationally and internationally, and regularly performs at the Winchester Street Theatre, as well as at the Harbourfront Centre in Toronto.
Image by André Carrotflower on Flickr under Creative Commons License.
Sight description based on wikipedia