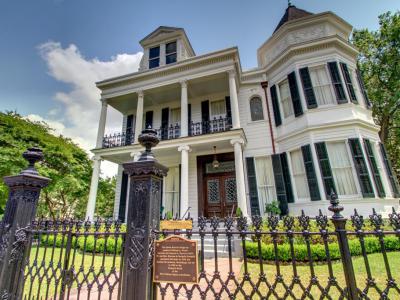 Some of the Garden District's most distinguished homes incorporate more than one style. Designed by architect William A. Freret in 1858, this one combines Greek Revival design with Queen Anne-style additions. Its wealthy merchant owner apparently lost his fortune after the Civil War and couldn't make the payments. Freret bought the house back at auction in 1867 for $30,700; later, in 1944, it was purchased for only $12,500 by Dr. Herman Seebold and his wife Nettie, a globe-trotting couple whose lives were steeped in art and music as well as in material wealth, which they lavished on its decor. By 1965 the couple were deceased with no heir apparent. Mrs. Seebold's hand-written will gave the glorious place and all its contents to the Opera Women's Guild; a stipulation noted that the 18th- and 19th-century treasures inside were not to be sold or removed. Today the home is rented out for various functions, including weddings, dinners, film shoots, and luncheons, with proceeds going to support the New Orleans Opera Association.

Tip:
Tours are offered on Mondays – between 10am and 4 pm – for $15. Walk up and ring the door bell – someone will answer and give you their mission statement. No reservation necessary and you'll be provided great insight into the majestic home and current New Orleans society.
Image Courtesy of Flickr and Chris Waits.