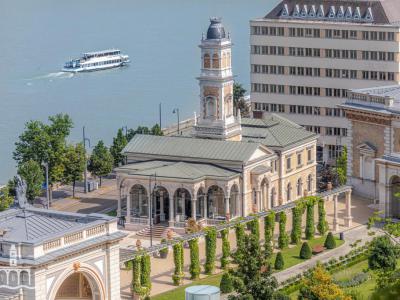 A listed World Heritage site, this tiny palace was built in the late 19th century. A combination of Renaissance and Baroque styles, it was created by Hungary's most influential architect, Miklós Ybl. At a glance, you can never guess that this charming building is, in fact, a pump house originally designed to supply water to the nearby Royal Palace. In 2009, during a canal construction, a six-room cistern system was discovered, by then completely forgotten, revealing the gravel layer that filtered Danube water for the use in the palace, predating the canalization system in Budapest. Later, when that system became fully-fledged, the cisterns lost their purpose, but the building remained and was reassigned to a new role, a music-n-dance pavilion for public entertainment. Upon that, in the early 20th century it was rebuilt as an elegant cafe-restaurant and served in that capacity for 40 years. People say that once it had a large garden with a dance floor at the front and a band playing on the terrace. For another 15 years, up until 2007, it functioned as a casino where modern-day gamblers came to enjoy themselves in an aristocratic setting.

In 2016, the building came into the possession of the Pallas Athena Foundation and changed its profile once again. This time around, though, the new owners not only masterly restored the facade and inner parts of the property, but also gave it a whole new life as an arts venue. Thus, the Ybl Budai Creative House came into being, a historic monument and cultural spot hosting art exhibitions, interactive events, performances, workshops, concerts, movie screenings and family programs. Moreover, just as in the old days, visitors here can enjoy good food at an on-site restaurant or simply kick back with a cup of coffee on the terrace with a panoramic view of the Danube.