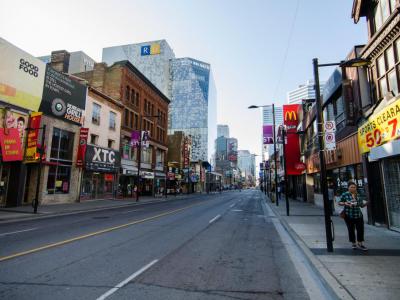 Yonge Street is a major arterial route in the Canadian province of Ontario connecting the shores of Lake Ontario in Toronto to Lake Simcoe, a gateway to the Upper Great Lakes. Yonge is also a major commercial thoroughfare in Toronto rather than a ceremonial one, with landmarks such as the Eaton Center, Yonge-Dundas Square and the Hockey Hall of Fame located along its length—and lends its name to the eponymous Downtown Yonge shopping and entertainment district.

The street was integral to the original planning and settlement of western Upper Canada in the 1790s, and was named by Ontario's first colonial administrator, John Graves Simcoe, for his friend Sir George Yonge, an expert on ancient Roman roads.

As Toronto's main street, Yonge hosts parades, street performances and protests. After major sporting victories, thousands of people gather on the downtown portions of the street, particularly near Dundas Square, to celebrate and the street gets closed to vehicular traffic while those are occurring. Streetcars on routes crossing Yonge in that area (Carlton, Dundas, Queen, King) during those celebrations will often have to cease operations a few hundred metres east or west of Yonge Street due to the crowds.

The construction of Yonge Street was designated as an Event of National Historic Significance in Canada.
Image by Jeff Hitchcock on Flickr under Creative Commons License.
Sight description based on wikipedia