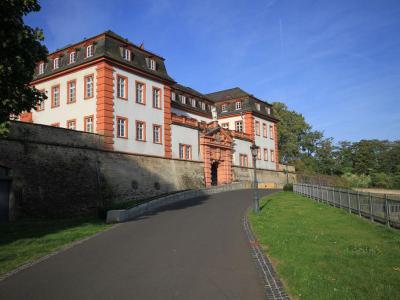 Mainz's location on the Rhine and in the center of the Holy Roman Empire made it a vital port and city. Mainz became part of the Grand Duchy of Hesse, which wanted more fortifications for this strategic location. The citadel survived many incursions and occupations. Residents sought shelter in the citadel during World War II.

Today, the Citadel hosts municipal offices and special events. It is a popular location for festivals and concerts such as the Christmas Market and the Citadel Festival. The Open-Ohr youth festival is one of the highlights of the year.

Tours are led by costumed guides who take visitors through the citadel, underground structures, and the moat.

Visitors will find the impressive Drusus stone at the southwest corner of the Citadel. This 20-meter (66-foot) tall Roman monument was erected in 9 AD. The monument honors the Drusus, a popular Roman general.
Image Courtesy of Wikimedia and Matthias Süßen.