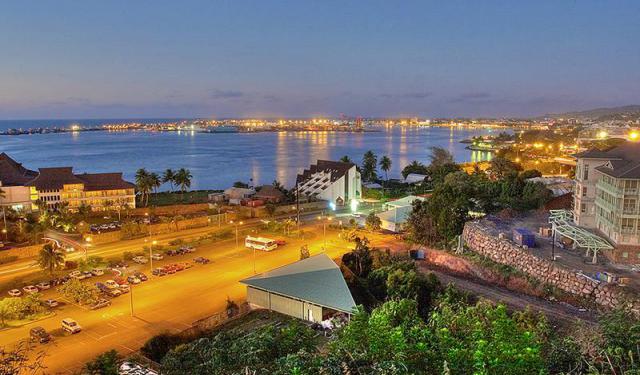 Image by Jérémie Silvestro on Wikimedia under Creative Commons License.

Papeete, the capital of French Polynesia, is renowned for its beautiful natural setting. Still, other than lush green areas and stunning beaches, the city boasts a number of man-made attractions as well, worth checking out. Just take a stroll down Boulevard Pomare and see for yourself or follow this orientation walk to discover some of the most loveliest sights of Papeete.
How it works: Download the app "GPSmyCity: Walks in 1K+ Cities" from iTunes App Store or Google Play to your mobile phone or tablet. The app turns your mobile device into a personal tour guide and its built-in GPS navigation functions guide you from one tour stop to next. The app works offline, so no data plan is needed when traveling abroad.

Newly built, the edifice is both the working area and the living quarters of the president. Since Mr.Temaru came into this building as President of the Government of French Polynesia in May, 2004, taking his position from Mr. Gaston Flosse, it has created the opportunity for all to visit inside the former President's Palace. Gaston Flosse's presidential palace is situated near the chic shopping district Center Vaima.
Image by FRED on Wikimedia under Creative Commons License.
2

Started in 1856 and opened in 1875, the cathedral is one of the oldest and largest churches in this town. Situated in the centre of town, it was set up with stones brought from Australia and granite from the Gambier Archipelago in 1875. After hitting a financial crisis, the project was shut down. The official opening took place in 1869 and the final product is what you see today. When the church is opened, go inside where it is quiet and cool, and look at the paintings of the Crucifixion.
Image by C r u s a d e r on Flickr under Creative Commons License.
3

Situated right in the centre of the town, this market is part of a highly economical shopping area and is considered to be the heart of all local activities. It is a two-storey, contemporary building with an escalator where the first floor is filled with fresh food, while on the second floor you will find crafts, pearls, unique souvenirs and local arts. The perfect time to visit here is Sunday mornings, when residents from all over the island come to shop.
Image by FRED on Wikimedia under Creative Commons License.
4

Inaugurated in 1990, the town hall is one of the most beautiful structures that is a re-creation of the original palace and royal residence of Queen Pomare IV of Tahiti. The city hall architecture is of Neoclassical style and the pink exterior catches the eye. When you enter inside the building you will see beautiful sculpted glass, Roco lifts and other pieces of historical significance. City Hall is surrounded by a beautiful garden which has several sculptures and artifacts.
Image by C r u s a d e r on Flickr under Creative Commons License.
5

The place is an exciting, modern square with benches, a waterfall and public toilets that are very clean and open all day; there is even a security guard. In the evening, the space for food stalls and musical events of all kinds is put to goo duse. Here you can enjoy a lovely day until about 3 am, where you can have a cheap meal at one of the roulottes (mobile dining vans).
Image by drip&ju on Flickr under Creative Commons License.
6

Stretching from the Place To'Ata to the Place Vaiete, the waterfront is the perfect place for a romantic evening. The waterfront has a holiday atmosphere and is always buzzing with activity. The great flavours of caramel popcorn and candies fill the air. Along the waterfront you can also see a park with a wonderful landscape and admire the Moorea Island which is a very scenic view from the promenade. You'll find various shops selling local food and a very festive atmosphere.
Image by giddyuphorsey on Flickr under Creative Commons License.
7

It was here that Queen Pomare IV lived in a beautiful mansion before the French took control in 1842 and used Tarahoi as their headquarters. Her lovely home is long gone, but is replicated by the Papeete Town Hall. Right in front of it, the modern edifice on the left is the Territorial Assembly and includes the home of the French Polynesian president.
Image by HKYSBCK on Flickr under Creative Commons License.
8

Situated at the entrance of the park, facing the seafront, you can see the Bougainville statue which is dedicated to Louis Antoine de Bougainvile, a French sailor. He stopped in this city in 1768 and became very famous in Europe when he published his "Voyage autour du monde" in which he described Tahiti as heaven on earth where men and women lived happily in innocence, away from the corruption of civilization.
Image by HKYSBCK on Flickr under Creative Commons License.
9

Located adjacent to the post office, the Bougainville park is the best place for a promenade in the fresh air while viewing the amazing surroundings of Papeete. The park is a real tropical heaven filled with lush green landscape. It has a lot of trees providing shade during the warmest part of the day when many are walking through the park. It is well maintained and is a great place for the kids to run around and have fun. There is an entire playground with rides and swings dedicated to kids.
Image by Jim Lamb on Flickr under Creative Commons License.
10

Papeete's vast road renovations are not just a traffic semicircle, through which the four directions of boulevard Pomare cross and meet the adjoining underground parking place. Located in downtown Papeete, on the port side, the semicircular park is very popular in this town, whose name created some problems because French tradition goes against naming a public place after a living president. Flosse officially initiated a two-level, underground parking lot for 280 vehicles, in addition to some landscaping between the entrance and exit, thus far unfinished.
Image by Olivier Bruchez on Flickr under Creative Commons License.
11

Built in 1998 by Robert Wan, a very famous black pearl specialist, the Pearl Museum not only covers the history of pearl cultivation, but also cultivation techniques and the business aspect of pearl trading. Enter the amazing world of pearls and jewels. It showcases a great number of special pearl elements on its display, the highlight being the world’s largest Tahitian pearl. Art, history, mythology, philosophy and religion are presented as well as technical explanations.
Image by Михал Орела on Flickr under Creative Commons License.
12

An impressive bell tower sits atop Eglise Evangélique, the biggest Protestant church in French Polynesia. The local Evangelical people grew out of the early work by the London Missionary Society. Today, the pastors are all of French nationality. Built in 1818, a section of the landfill across the boulevard is reserved for the church. Papeete national sport, canoe racing and boats landing in the harbour during lunchtime and after work used to be held across the boulevard from the church.
Image by Olivier Bruchez on Flickr under Creative Commons License.
13

This is the main walking area along the waterfront, where you’ll find paved walking paths that meander past blooming planter boxes and the occasional tree.
Image by Marc CARAVEO on Flickr under Creative Commons License.

Create Your Own Walk in Papeete

Creating your own self-guided walk in Papeete is easy and fun. Choose the city attractions that you want to see and a walk route map will be created just for you. You can even set your hotel as the start point of the walk.

When tourists think of Tahiti, they imagine beautiful islands with a dreamy blue sea and miles of white sandy beaches, but Papeete is in reality part of a modern-day bustling city. Though a fairly young city, Papeete has several beautiful places which are a must visit including City Hall, the museum and the gorgeous waterfront. Take the walking tour below to explore the most exciting tourist...  view more