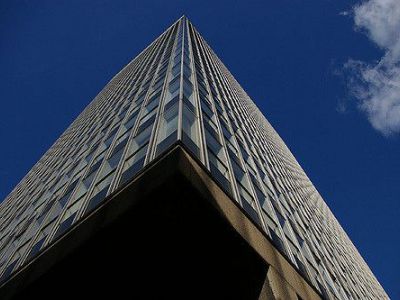 1 Furnival Square is a tower currently on hold located at 1 Eyre Street in Sheffield, England. Plans were submitted in 2006 and accepted that year. Construction started in 2007 on the smaller Jury's Inn section, of which completion is near, the taller office tower is on hold. When completed, it will be 67m (221ft) tall, with the highest floor at a height of 59m (195ft). It will have 17 floors above ground and 1 below ground. It will have 4 elevators. It consists of two buildings joined at the base. The ground floor is retail, the whole of the tall tower is office, and the small one houses a Jury's Inn hotel. It was originally intended to be one 43 meter tall 11 story tower, but this was later increased to two towers, one of which is at the original height, and the other at 67m tall and with 17 overground floors. It was placed on hold in January 2009 due to the economic climate worsening, with the Jury's Inn hotel tower complete and foundations dug for the office block.
Image Courtesy of Flickr and http://underclassrising.net/.
Sight description based on Wikipedia.