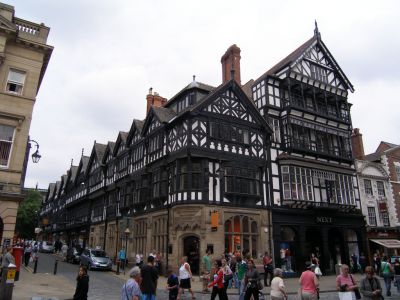 The council intended to sell the vacant land in separate lots, but the Chester architect John Douglas bought the entire length of the east side of the street and planned to create a series of buildings in a unified architectural design. Douglas' original plan was to construct the buildings in stone with brick diapering in Gothic style. However, he was persuaded by the Duke of Westminster to include black-and-white half-timbering in his design.

The building at the south end, on the corner of Eastgate Street, was the first to be occupied. It was acquired by the Bank of Liverpool, and the other units were used as shops. Twelve years after Douglas' death, a commemorative plaque was placed on the St Werburgh Street side of the bank by some of his former pupils and assistants.

The terrace is constructed in three storeys, plus attics, with roofs of green Westmorland slate. The ground floor of the bank is built in yellow sandstone on a granite plinth. The upper storeys are all half-timbered.

Along St Werburgh Street, the first five ground floor bays are in stone, and the rest have modern shop fronts. Rising from the roof are brick decorated chimney stacks. The upper storeys display "an unbroken expanse of gorgeously ornamented half-timber", and include carvings of Norman earls, saints (including St Werburgh), and Queen Victoria.
Image Courtesy of Wikimedia and Japiot.
Sight description based on Wikipedia.