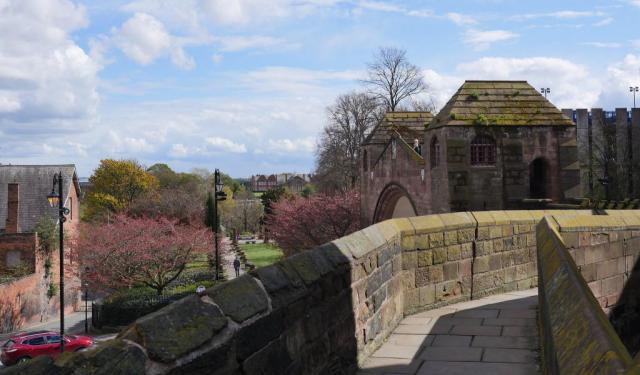 Chester is the only city in Great Britain that maintained the full circuit of its ancient defensive walls. The main access through the walls is provided by four major gates. There are also towers along the walls such as Water Tower and Bonewaldesthorne's Tower. Today, tourists may travel down the ancient walls and learn about the rich history of this magnificent city.
How it works: Download the app "GPSmyCity: Walks in 1K+ Cities" from iTunes App Store or Google Play to your mobile phone or tablet. The app turns your mobile device into a personal tour guide and its built-in GPS navigation functions guide you from one tour stop to next. The app works offline, so no data plan is needed when traveling abroad.

The Watergate is in Chester and spans the A548 road between Watergate Street and New Crane Street.

It was built between 1788 and 1790 for Chester City Council and replaced a medieval gate. The architect was Joseph Turner. It is built in red sandstone ashlar and consists of a basket arch of short rusticated voussoirs. The parapet consists of stone balusters interspersed with panels. A drinking fountain, which is now dry, is fixed to the north abutment and is dated 1857.

Image by John S Turner on Wikimedia under Creative Commons License.
Sight description based on wikipedia
2

The Water Tower is a 14th-century tower in Chester which is attached by a spur wall to Bonewaldesthorne's Tower on the city walls. The original name of the tower was New Tower but in the 17th century it became known as the Water Tower, although the City Assembly tried to insist on the usage of its correct name. The tower was built between 1322 and 1325, at which time it stood in the River Dee. The architect was John (de) Helpston. Its prime purpose was to defend the port of Chester, and it was also used to monitor the movements of shipping and to ensure that the custom dues were paid.

The tower and spur wall are built in sandstone rubble. The tower is about 75 feet (23 m) high, and the wall is 97 feet (30 m) long, just over 11 feet (3 m) wide and about 24 feet (7 m) high. An archway in the city walls leads to 44 stone steps on the way down to the tower. The wall is crenellated. The tower is circular at its base with a square turret above, in two stages containing octagonal chambers, one above the other.

Image by Tom Pennington on Wikimedia under Creative Commons License.
Sight description based on wikipedia
3

Bonewaldesthorne's Tower is a medieval structure on the northwest corner of the city walls of Chester. The tower has been documented since 1249. It was rebuilt or altered in 1322–26 when it became the gatehouse to the Water Tower.

The plan of the tower is rectangular. It is built in red sandstone coursed rubble and stands on a tall plinth. Seven steps lead up from the walkway on the city walls to an arched doorway. On the opposite side another doorway leads on to the spur wall to the Water Tower. The top of the tower is battlemented. Inside the tower is a fireplace and a closed staircase which is lit by a single slit window.

Image by John S Turner on Wikimedia under Creative Commons License.
Sight description based on wikipedia
4

St Martin’s Gate opened in 1966 as part of the Ring Road scheme. During its construction, remains of Roman tower were found. The name derived from an ancient church which was demolished to give space for the road. Today, St. Martin's is a very popular attraction and well worth your visit.
Image by orangeacid on Wikimedia under Creative Commons License.
5

The Northgate is in Chester where it carries the city walls footpath over Northgate Street. The present Northgate stands on the site of the original northern Roman entrance to Chester. During the medieval period, it was unimportant and it was used only for local access. At that time it consisted of a simple rectangular tower with a narrow gateway. It later was the site of the local goal. The present Northgate was built in 1810 to replace a medieval gatehouse and was designed by Thomas Harrison for Chester City Council.

It is built in pale red sandstone ashlar and consists of a segmental arch with a coffered soffit which spans the carriageway. On each side of the arch is a rectangular portal for the pavement. On both sides of the portals are attached unfluted monolithic Doric half-columns at each corner. Across the top of the structure is a dentilled cornice which carries a panelled parapet. In constructing Northgate, Harrison used "as few and as huge stones as possible".
Image by chestertouristcom on Wikimedia under Creative Commons License.
Sight description based on wikipedia
6

Kaleyard Gate is a postern gate in Chester city walls. In the 13th century the monks of St Werburgh's Abbey had developed a vegetable garden (known as the kaleyard) outside the city walls. Access to it was by a devious walk through Eastgate and they wanted to have an easier route. They petitioned Edward I in 1275 to allow them to cut a gate through the wall to provide direct access to the garden. This he allowed under certain conditions, one of which was that it must be locked at nightfall. The gate consists of a simple opening in the sandstone wall containing a door.
Image by Peter I. Vardy on Wikimedia under Creative Commons License.
Sight description based on wikipedia
7

Chester city walls consist of a defensive structure built to protect the city of Chester. Their construction was started by the Romans when they established the fortress of Deva Victrix between 70 and 80 AD. It originated with a rampart of earth and turf surmounted by a wooden palisade. From about 100 AD they were reconstructed using sandstone, but were not completed until over 100 years later. The defences were improved, although the precise nature of the improvement is not known. After the Norman conquest, the walls were extended to the west and the south to form a complete circuit of the medieval city. The circuit was probably complete by the middle of the 12th century.

Maintenance of the structure of the walls was an ongoing concern. They were further fortified before the Civil War, and were damaged during the war. Following this they ceased to have a defensive purpose, and were developed for leisure and recreation. The walls are now a major tourist attraction, and form an almost complete circuit of the former medieval city, providing a walkway of about 2 miles (3.2 km).
Image by chestertouristcom on Wikimedia under Creative Commons License.
Sight description based on wikipedia
8

The Bridgegate is in Chester. The Roman city walls were extended to the south in the 12th century with a wall parallel to the north bank of the River Dee. This section of the wall incorporated the original Bridgegate which must have been built by the 1120s, as the office of sergeant of the gate was recorded in that decade. The gate guarded the southern entrance to the town; the road from North Wales ran through the gateway directly after crossing the Old Dee Bridge. It is possible that the gateway was rebuilt at the time the bridge was rebuilt in the later part of the 14th century. Between 1521 and 1624 the bridge tolls were controlled by the Talbot family, the Earls of Shrewsbury, whose town house, now the Bear and Billet, was nearby.

At the end of the 15th century the bridge consisted of a Gothic arch with a tower on each side. In 1600–01 a square tower was added which contained machinery for lifting river water into the town. This was known as John Tyrer's Water Tower, after its builder, but the tower was destroyed in the siege of Chester in 1644–65. The present bridge was built in 1781 for Chester City Corporation, the architect being Joseph Turner.
Image by chestertouristcom on Wikimedia under Creative Commons License.
Sight description based on wikipedia