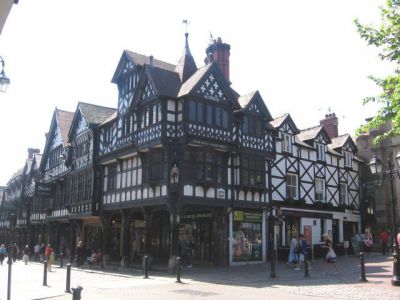 The 27–31 building is more complex than the others on Northgate Street, consisting of shops, offices and a public house, with one face overlooking Northgate Street and the other – Town Hall Square.

The public house dates probably from the early 19th century, and the rest of the building was re-fronted by John Douglas in 1902. As a whole, it is constructed in three storeys with a small attic and cellars. The Northgate Street face has a three-bay arcade on the street level.

Among the most attractive features of the building are the niches above the capitals of the columns supporting the arcade, decorated with carvings of figures; those facing the street are in Elizabethan costume playing instruments, while the two figures at the corner of the two faces are carrying scrolls.

The middle storey of the face is jettied. It has a two-light mullioned and transomed casement window in number 29, and a four-light oriel window in number 31. At the corner of the building is a half-size painted effigy of Edward VII.