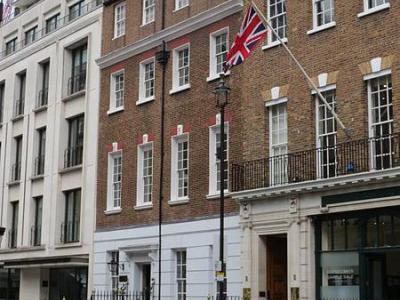 During The Beatles' career, this was the location of the Apple Record headquarters, with footage of the basement having been featured in the second half of the band's “Let It Be” film.

Perhaps more famously, on January 30, 1969, during the lunchtime hours, it was on top of this building that the Beatles played their last ever live performance. The 5 song, 42 minute set was comprised of material eventually released on the “Let it Be” album the following year. It marked the end of an era, with the 60s soon drawing to a close and the band all but broken up in a few months.

The unannounced concert was itself broken up by the police (stationed on the same block, just a few doors down!), who filed numerous noise complaints from the nearby offices. The final member of the band to speak before being cleared away was John Lennon who said, “I hope we passed the audition.”

Today, the site is just a photo op outside a clothing store; however, the UK and London have given it the historical recognition it deserves by placing a plaque about halfway up the front of the building.

Outside it still is remarkably the same as featured in the movie “Let it Be” and the police station down the road is still there, so one can get the feeling of time standing still.
Image by Poirier2000 on Wikimedia under Creative Commons License.