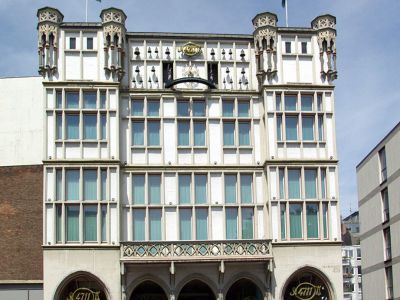 4711 (pronounced "forty-seven eleven" or "siebenundvierzig elf") is the Eau de Cologne brand of Mäurer & Wirtz and is produced in Stolberg near Aachen, Germany. At the beginning of the 18th century, Italian expatriate Johann Maria Farina (1685-1766) created a new fragrance and named it Eau de Cologne ("water from Cologne"), after his new residence, Cologne. In the course of the 18th century, the fragrance became increasingly popular. Mülhens opened a small factory at Cologne's Klöckergasse (name changed in the 19th century to Glockengasse) and began manufacturing his own version of the fragrance. In later years, his grandson Ferdinand Mülhens chose a new name for the firm and their product. He chose the number 4711, a number that the city of Cologne had assigned to Wilhelm Mülhens' future residence on the eve of the French Revolution.

Why You Should Visit:
The only shop where you should sample & buy 4711 in Germany. Many scents to choose from!

Tip:
You can create your own perfume or just look for different types of souvenirs for family and friends.

Want to visit this sight? Check out these Self-Guided Walking Tours in Cologne. Alternatively, you can download the mobile app "GPSmyCity: Walks in 1K+ Cities" from iTunes App Store or Google Play. The app turns your mobile device to a personal tour guide and it works offline, so no data plan is needed when traveling abroad.

Cologne is one of the most popular shopping destinations in Germany. People make special trips to the cathedral city just to stroll and shop to their heart's content. The most popular shopping streets are Schildergasse and High Street. There are also shopping centers like Neumarkt Galerie and Global City Building that are well worth checking out. Follow this self-guided shopping tour to...  view more