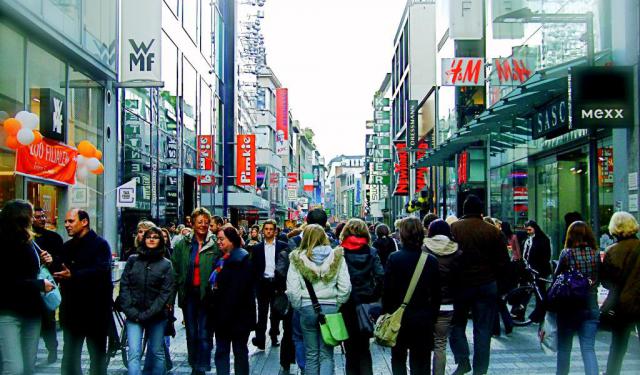 Calling the shops, whilst in Cologne, is the thing you definitely should not miss! One of the most popular shopping destinations in Germany, this “cathedral” city abounds in malls, designer stores and various national and international brand outlets fit to impress anyone and let you shop till you drop! Some people even make special trips to Cologne just to stroll and buy things to their heart's content.

The most popular shopping streets – Schildergasse and Hohe Straße (High Street) – are among the most-visited in Germany. Schildergasse's highlight is the Weltstadthaus, which resembles a huge glass whale, inside which there is the Peek & Cloppenburg clothing store. Also lining Schildergasse you will find plenty of other major department stores, such as H&M and Zara, and of course shoe stores.

Walking along this pedestrianised thoroughfare you will reach Neumarkt, home to a smart shopping center based around the Neumarkt Galerie mall. Running from Schildergasse towards Wallrafplatz, near the Dom, is Hohe Straße. Here you can buy just about everything, from fashion to cosmetics to jewelery and electronic equipment; numerous souvenir shops offer Cologne mementos. Galeria Kaufhof (Cologne's best general department store) is also located in Hohe Straße.

In general, shopping in Cologne covers pretty much all bases. Design, innovation and character are prized possessions here - and the local boutiques duly reflect that. If you are planning a holiday trip to Cologne with a bit of shopping in mind, you can visit these locations with the help of our self-guided walking tour and experience the best shopping in this historical city!
Image Courtesy of Flickr and R/DV/RS.
How it works: Download the app "GPSmyCity: Walks in 1K+ Cities" from iTunes App Store or Google Play to your mobile phone or tablet. The app turns your mobile device into a personal tour guide and its built-in GPS navigation functions guide you from one tour stop to next. The app works offline, so no data plan is needed when traveling abroad.

Cologne is one of the beautiful cities in Germany where you can find an extensive range of museums galleries and shopping centers. If you are an avid shopper, you must not miss a visit to the Neumarkt Galerie on your trip to this city.

This is the largest shopping center in Cologne and the beautiful building features a stunning ten meter artwork that depicts the dropped cone or the upside down ice cream cone. This artwork is the crown of the building and was created by Van Brugge and Oldenburg, two American artists.

Enter the shopping center and you will immediately notice its friendly and pleasant environment. The granite floor is indirectly lit by the light in the ceiling. A striking effect is produced by the dark colored wooden hand rails and the stainless steel and glass structure. There are a total of three floors housing 65 shops in this complex.

At the center of Nenmarkt Galerie, you can find the forum. Located under a huge glass copula, this forum has a round lighting unit. Shops at the ground and upper level sell a variety of unique and interesting jewelry, fashion clothing and shoes from popular brands. Visitors find respite from shopping as they relax at the bistros, restaurants and cafes. Visit this vibrant and lively market and enjoy shopping to your heart’s content.


Image Courtesy of Wikimedia and Superbass.
2

The 4711 House of Fragrances is home to a museum and the original cologne store. 4711 refers to the building where fragrances were manufactured in 1792.

Wilhelm Mulhens was another fragrance producer who started manufacturing "miracle water" as a medicine. During the French Occupation at the end of the 18th century, a soldier listed the building where Mulhens created his fragrance as "4711" in a census.

In 1810, a Napoleonic law required all medicine producers to list their ingredients. Mulhens decided to repackage his product as a fragrance rather than disclose the secret ingredients.

Mulhens wanted to capitalize on the famous Farina name and bought the rights to the Farina name. However, this purchase was suspect and the Farina family sued Mulhens. Mulhens finally adopted the 4711 name in 1881.

The original 4711 building no longer exists. The new 4711 building houses the flagship 4711 store and a museum. Visitors can enjoy the Fragrance Fountain, which circulates the 4711 Original "Water from Cologne". In addition, visitors can tour exhibitions including old Rosoli bottles and historic perfume creations.

The 4711 building has 20 bells and plays three tunes every hour.

Tip:
You can create your own perfume or just look for different types of souvenirs for family and friends.

High Street is one of Cologne's oldest streets. Today, it is a popular pedestrian-only shopping street.

High Street was originally a Roman Cardo Maximus street. This busy street was lined with shops and vendors. The forum with temples and the Praetorium was located along the street. In addition, two Roman legions had hospitals, canteens, and barracks along the street.

High Street has been central to Cologne's culture over the centuries. The street has held different names, such as Stone Street during the Middle Ages. During the French Occupation of 1795-1814, a French survey called the street "High Street" in reference to the High Porte on its southern end.

High Street became a busy shopping street during the 19th century. Today, visitors will find a wide range of shops. Don't miss visiting the famous chocolatier Stollwerck. Kids of all ages will love the massive Lego store. The street also features dozens of cafes and restaurants.
Image Courtesy of Flickr and Citizen59.
4

Schildergasse is Cologne's most visited shopping street and the busiest in Europe. According to a 2014 survey, 14,590 people walk the street every hour. Schildergasse is a pedestrian-only area and connects to High Street on its eastern end and the New Market on the western end.

Schildergasse dates to Roman times and was the Roman city's east to west street, or Decumanus Maximus. During the Middle Ages, the street housed many artists who painted coats of arms. The Schildergasse name originated from this time, as Schilder means signs.

The street features the Weltstadthaus, which looks like an enormous glass whale. The Weltstadthaus is home to the Peek & Cloppenburg clothing store. The impressive glass facade has 6800 individual panes.

In addition to shops, the street is home to several landmarks. For example, visitors will find the Atoniterkirche, Cologne's oldest Protestant Church.

Why You Should Visit:
One of the most popular shopping streets in Europe, with seemingly endless possibilities to eat and drink, plus all the famous German, European and US brands.
Image Courtesy of Wikimedia and Raimond Spekking.
5

The Global City Building is a dramatic modern building that houses the Peek & Cloppenburg department store. To some viewers, it resembles a whale, and to others, it resembles a ship. Residents call it the Walfisch, which can be translated as the whale.

Italian architect Renzo Piano designed the Global City Building, which was completed in 2005. The building's atrium is 36 meters (118 feet) tall. The building bridges the gap between Cologne's modern and classic architecture. The modern wood and glass facade reflects the nearby Gothic church, while the stone facade faces the more recent concrete buildings.

The glass facade features 6800 individual glass panes and 66 enormous Siberian larch beams. The northern facade features natural stone. The glass dome is only supported in a few locations. It is supported by tension cables and attached to the fourth floor.

Cologne is one of Germany's oldest cities. It was founded as a Roman settlement on the Rhine in the first century, then known as the Colonia Claudia Ara Agrippinensium.

The name came from Agrippina the Younger, wife of Roman Emperor Claudius. She came from the area and petitioned the emperor to raise the status of her home to a Colonia--a city under Roman law. During the Roman period, it...  view more

Around 75% of Cologne was destroyed by Allied bombing during World War II. Following such devastation, it meant that most of what was built immediately after the war came from the so-called “As quickly and cheaply as possible” school of architecture. Eventually, as the things settled, the architects were given the chance to build something that would really stand out.

The beautiful and historically rich city of Cologne has been around for over 2,000 years. For centuries, it has been regarded as a very important religious center.

The Kölner Dom (Cologne Cathedral), one of its biggest attractions, is renowned as a symbol of Christianity and “a masterpiece of exceptional intrinsic value” (UNESCO World Heritage Site). The twelve Romanesque churches of...  view more

In Cologne they say, "Kölsch is the only language you can drink." Brewed only here and nowhere else, Kölsch – a light beer, slightly bitter, bright yellow in color, and made of top-fermented yeast – is forbidden for production in any other part of Germany.

Each licensed brewery in the city makes its own variation of Kölsch, served traditionally in a tall, thin, cylindrical...  view more