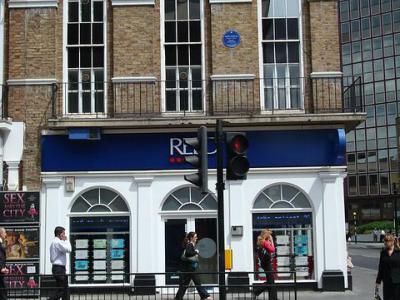 Site of the Beatles' first Apple venture which, in Paul's words, was to be “a beautiful place where beautiful people can buy beautiful things.”

How it all started is not very clear, but in September 1967 the Beatles gave three Dutch designers (who became known as the "Fool") £100,000 to design and stock their new Apple boutique.

Across the entire front and side of the store, a huge psychedelic mural was painted in hippie fashion – with rainbows and other psychedelic imagery – before complaints from local merchants were made and the mural had to be whitewashed over (it's presumably still there under the paint).

The boutique itself opened in December 1967, with the launch party attended by John Lennon and George Harrison with their wives, as well as Eric Clapton, Cilla Black, Kenneth Tynan, and others, who were seen sipping apple juice as the shop had no alcohol license.

The stock was mostly comprised of fashion garments and accessories aimed at young people – all at the cutting edge of hippie chic – but turned out to be a financial disaster because it was instantly plagued with shoplifting, carried out by both customers and staff.

Only 8 months after the boutique opened, the Beatles got fed up with it and closed it down, taking the best of the remaining stock for themselves. On Tuesday morning, 30 July 1968, they threw open the doors and invited the public to help themselves to the rest.
Image by Emanuel Berglund on Flickr under Creative Commons License.