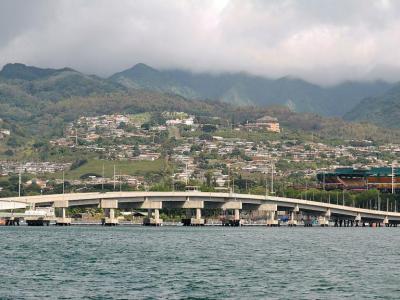 The Admiral Clarey Bridge is also known as the Ford Island Bridge, since it connects Hawaii to Ford Island, a U.S. navy installation in the middle of Pearl Harbor. The bridge was named in honor of Admiral Bernard A. Clarey, a submarine commander during World War II. He was the Commanding Officer for the Pintado, a submarine that patrolled the Pacific in 1944. One night in June, the Pintado fired on a Japanese convoy, making six direct hits with all of her torpedoes. Later on, she damaged a large freighter, and sank three more. Clarey was awarded the Navy Cross for the Pintado's success.

The Admiral Clarey Bridge is, 4,700 feet long, and includes a nearly 1000 foot section that can be retracted to allow ships to pass by. Prior to the bridge's construction, the only transportation available to and from the island was in the form of two diesel powered ferries. At this time, access to the island was limited to military personnel and their families. Unfortunately, during the 1990s, only one ferry was operational, and the last ferry of the night left at 11:00 pm. This left many navy personnel spending the night in the ferry parking lot if they missed the boat. The bridge, build in 1998, helped eliminate this problem.
Image by Bob Linsdell on Wikimedia under Creative Commons License.