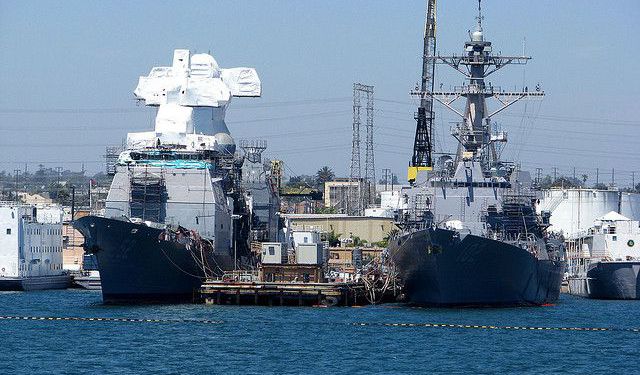 Pearl Harbor, a US deep-water naval base in Honolulu, made history in 1941 when came under attack by the Imperial Japanese Navy Air Service prompting the United States' entering World War II. Since 1964, Pearl Harbor has been declared a National Historic Landmark, featuring a number of military objects and installations turned-monuments. This self-guided tour invites you to pay tribute to the fallen heroes and to learn more about those days at Pearl Harbor.
Image Courtesy of Flickr and Rennett Stowe.
How it works: Download the app "GPSmyCity: Walks in 1K+ Cities" from iTunes App Store or Google Play to your mobile phone or tablet. The app turns your mobile device into a personal tour guide and its built-in GPS navigation functions guide you from one tour stop to next. The app works offline, so no data plan is needed when traveling abroad.

It is not only service members who are honors at the Pearl Harbor National Memorial. Some civilians lost their lives on that fateful day as well. Among those civilians who were wounded and killed were one who worked at an accidentally targeted sugar mill, civilians who worked in the shipyards and a family whose house was struck. Out of the 2,390 people killed at Pearl Harbor, 49 were civilians.

Visitors to Pearl Harbor generally start their tour with an orientation at the Aloha Court. From there, they can decide how to spend their time. Though some tourists will view the monument over the course of a few hours, others should plan a full day to truly appreciate the memorial and the other nearby historic sites.

One of the features at the Pearl Harbor National Memorial is an exhibit gallery that shows photographs and memorabilia from both before and after the attack. Recorded memories from survivor are offered in the kiosks at the exhibit hall.

Why You Should Visit
- To honor the legacy of those who lost their lives during the attack on Pearl Harbor
- To learn about the history of the U.S. involvement during World War II

Tips
The Pearl Harbor National Memorial is open daily from 7 AM through 5 PM. Cost to visit the memorial is free, though those who book in advance may need to pay a $1 booking fee.

The USS Bowfin was a Balao-class submarine used extensively from 1942 to 1971. It is one of only 15 U.S. World War II-era submarines still in existence. The USS Bowfin went on nine patrols ranging from Japan to Australia before being decommissioned and placed in reserve in 1947. In 1980, the USS Bowfin was moved to her current location beside the USS Arizona Memorial Visitors' Center. Visitors can tour the submarine with an audio narration of life in the vessel during WWII.

The USS Bowfin Museum has several different exhibits, including the Waterfront Memorial. This lists 52 submarines that were lost during wartime, as well as all of the men that were on board. There's also a Japanese human torpedo on display. This weapon was a manned suicide torpedo used exclusively by the Japanese during WWII. It contained nearly 4,000 pounds of TNT and had no escape hatch for the pilot. These torpedoes were called “Kaiten,” a word that means “Return to the sky,” and were meant to be launched from a ship or submarine towards other naval craft. While the Kaiten were in use, eight launching craft and nearly nine hundred human lives were lost. In addition to the Waterfront Memorial and Kaiten display, the USS Bowfin Museum is filled with submarine weapons systems, photos, battle flags, and vintage recruitment posters.

Why You Should Visit:
If you have time while you are at Pearl Harbor, are not claustrophobic, and haven't been on a submarine before, then you should definitely go on this one.
The audio tour they give you with the price of admission is very good and includes several personal accounts from Marines who served on the Bowfin.

Tip:
Remember to watch out and not hit your head on all the low clearance spots (if you are over 6'3", be prepared to duck often).
Make sure you visit the museum before touring the Bowfin for the obligatory history of submarines, or save your ticket and do the museum later.

The Admiral Clarey Bridge is also known as the Ford Island Bridge, since it connects Hawaii to Ford Island, a U.S. navy installation in the middle of Pearl Harbor. The bridge was named in honor of Admiral Bernard A. Clarey, a submarine commander during World War II. He was the Commanding Officer for the Pintado, a submarine that patrolled the Pacific in 1944. One night in June, the Pintado fired on a Japanese convoy, making six direct hits with all of her torpedoes. Later on, she damaged a large freighter, and sank three more. Clarey was awarded the Navy Cross for the Pintado's success.

The Admiral Clarey Bridge is, 4,700 feet long, and includes a nearly 1000 foot section that can be retracted to allow ships to pass by. Prior to the bridge's construction, the only transportation available to and from the island was in the form of two diesel powered ferries. At this time, access to the island was limited to military personnel and their families. Unfortunately, during the 1990s, only one ferry was operational, and the last ferry of the night left at 11:00 pm. This left many navy personnel spending the night in the ferry parking lot if they missed the boat. The bridge, build in 1998, helped eliminate this problem.
Image Courtesy of Wikimedia and Bob Linsdell.
4

The USS Oklahoma was a World War I-era battleship, and one of the first to rely on oil for power, as opposed to older, coal-powered battleships. Though the Oklahoma was used in World War I, she was modernized between 1927 and 1929, and used to rescue refugees during the Spanish Civil War. After the ship returned to the Pacific in 1939, she remained there. The ship was sunk during the attack on Pearl Harbor in 1941, and 429 members of her crew sank with her.

Unlike the USS Arizona, the Oklahoma was raised in 1943. Unfortunately, the ship was irreparably damaged, and was not returned to duty. Instead, all of the Oklahoma's weaponry and key components were stripped, and the ship was sold for scrap. The USS Oklahoma finally sank while being towed to the mainland in 1947.

The Oklahoma Memorial was designed to commemorate the lives that were lost with the sinking of the Oklahoma. For each of the 429 men that were lost, there is an individual white marble column. This gives visitors a real sense of just how many people 429 is- it's easy to talk about losing 429 people on the Oklahoma, or 1,177 on the Arizona, but the Oklahoma Memorial gives visitors a real idea of the toll that the attack on Pearl Harbor caused.
Image Courtesy of Flickr and Wesley Fryer.
5

The USS Missouri is the last battleship built by the U.S. Navy, and was the site of the official end of World War II. It was on this ship Japan officially signed the surrender document on September 2, 1945.

The USS Missouri was commissioned in 1944, and fought in both the battles of Iwo Jima and Okinawa, in the Korean War between the years 1950 and 1953, and then in Operation Desert Storm in 1991. All told, the Missouri received a total of eleven service stars before being decommissioned in 1992. In 1998, the ship was donated to the USS Missouri Memorial Association for use as a museum ship. One of the ship's trademarks is her nine 16-inch guns. The barrel of each one is roughly 67 feet long and weighs over 115 tons.

Why You Should Visit:
Symbolism aside, it is quite interesting to see a WWII-era battleship that was modernized in the 1980s. This ship truly has one of the most unique stories in all of the U.S. Navy.

Tip:
If you purchase tickets online, make sure you go to the Visitor Center before entering. You need to show the receipt that you can only get from the Visitor Center when you board.
Shuttle to Ford Island and the site is free and takes about 10 mins. Shuttles arrive every 10-15 mins, so there's no need to panic if you miss one.

The Pearl Harbor Aviation Museum is located on Ford Island, in the middle of Pearl Harbor. The island used to be accessible solely to military personnel, their guests, and their families, but, with the construction of the Admiral Clarey Bridge in 1998, it is now open to visitors.

The Museum itself is housed in the seaplane hangars that survived the bombing of Pearl Harbor. The displays present a collection of WWII-era military aircraft, including Japanese Zero aircraft, American bombers, some planes used in the Korean war, and a set of vintage Japanese torpedoes similar to those used during the bombing of Pearl Harbor. The museum also has a 200-seat theater, gift shop, and restaurant. Visitors can additionally experience a combat flight simulator, which offers simulated dogfights with enemy planes over the Pacific. If visitors look closely, they can still see some of the bullet holes from the attack on Pearl Harbor that on the windows of Hangar 37.

Tips:
The planes have descriptive plaques, but for a complete experience, try and catch a docent tour using the Aviator's Tour option.
Eat at the museum rather than at the USS Arizona or USS Missouri memorials – food choices are better here.