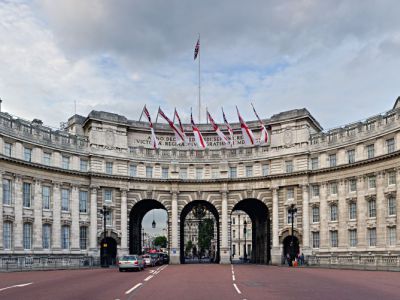 Heading west up the Strand to Trafalgar Square, one can't help noticing the Admiralty Arch. This arch is one of the most photographed buildings in London and marks the outset of another major street, the Mall, leading straight to Buckingham Palace, residence of the British monarch.

The Admiralty Arch was commissioned by King Edward VII in memory of his late mother, Queen Victoria. Sadly, the King never lived to see it finished, as he himself died before it was completed in 1911. The building adjoins the Old Admiralty from which it takes the name. The Admiralty originally housed the offices and residences of the Sea Lords – heads of the Royal Navy. Today, the building has been sold on a 125-year lease to a private developer to be converted into a 100-room hotel complete with residences and a private members' club.

A peculiar thing about the arch is the so-called “nose” – a stone protrusion, the size and shape of a human nose – found high on the inside of its northernmost wall. No-one knows for certain as to why it is there or what it represents. Some say, this is one of the several prosthetic noses placed around London by artist Rick Buckley some decade ago. Others reckon the nose is a tribute to the Duke of Wellington who indeed had a fairly large nose, although there’s no absolute proof to that. This fact, however, doesn't stop the Royal Horse Guards, passing through the arch, from routinely rubbing this protrusion for a good luck as a token of their respect to the Iron Duke:)
Image Courtesy of Wikimedia and Diliff.