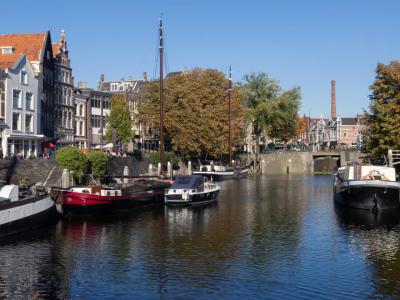 The now picturesque part of Rotterdam, popular for its delightful residential and commercial properties, the Aelbrechtskolk area in the historic Delfshaven district is a former canal-lock. It was built in the early 15th century after Aelbrecht van Beieren, Count of Holland and Zeeland, had granted Delft the right to dig its own schie (waterway) to the Maas river in 1389.

The result was that the Delfshavense Schie, discharged into the river between the ports of Schiedam and Rotterdam, allowed Delft to benefit solely from the hefty port dues. The canal opening in the dyke, which could be closed at high water by a sturdy lock, was made around 1400.

The original sluis (lock ) in Aelbrechtskolk was located where today's Café De Oude Sluis is. In 1594 it was replaced and moved. Many other local buildings also had to go eventually, to make way for the new Schiedamseweg, which was extended to the Binnenweg around 1910 to create a direct link between Schiedam and Rotterdam.

Most of the buildings around the Aelbrechtskolk are historically important and listed as the National Heritage. Among them is the Oude- or Pelgrimvaderskerk, the old church where the Pilgrim Fathers (a group of English Puritans) had spent a night praying before embarking on their perilous journey across the Atlantic to America in 1620.
Image Courtesy of Wikimedia and Michielverbeek.