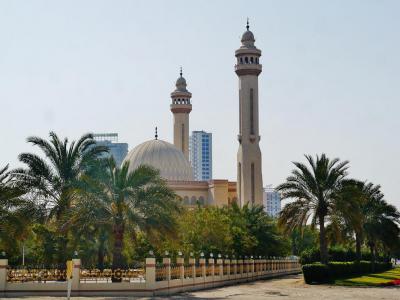 The huge dome built on top of the Al-Fatih Mosque is made of pure fiberglass. Weighting over 60 t (60,000 kg), the dome is currently the worlds largest fibreglass dome. The marble used in the floors is Italian, while the chandelier is from Austria. Throughout the Mosque, there are calligraphy writings, in a very old type of style called Kufic. Al-Fateh now includes the new National Library which opened to the public in 2006. The mosque was built by the late Sheikh Isa ibn Salman Al Khalifa in 1987. It is named after Ahmed Al Fateh, the conqueror of Bahrain.
Image by omar_chatriwala on Wikimedia under Creative Commons License.
Sight description based on wikipedia

Manama is a primarily Islamic city and is home to a number of mosques, which are each unique in their own way. The city's mosques are more than just places of worship; they are architectural masterpieces and vivid examples of Bahrain's culture and religion. Don't leave Manama without visiting the splendid mosques and religious buildings found on this walking tour.