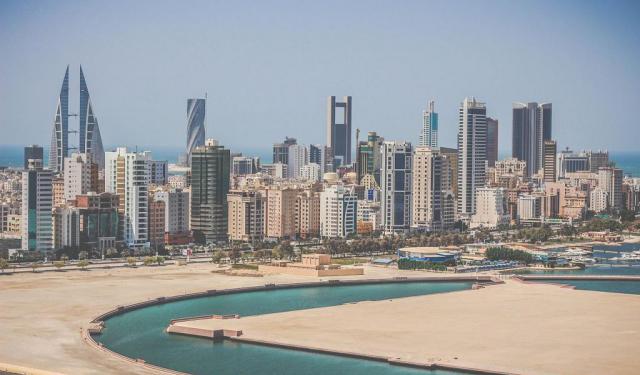 Manama is a modern looking metropolis that has been at the center of major trade routes for centuries. The capital city of Bahrain, nicknamed the “Pearl of the Gulf” for its pearl industry playing an important role in the national economy, the city projects an image of prosperity, and is replete with monuments, fountains, parks and archaeological sites. The Bahrain National Museum charts history of the region from the ancient Dilmun civilization that was dominant here for thousands of years. The city's bustling Bab el-Bahrain Souq offers a variety of local produce, from colorful handwoven fabrics and spices to pearls. Follow this orientation walk to visit Manama's most notable attractions.
Image Courtesy of Wikimedia and Wadiia.
How it works: Download the app "GPSmyCity: Walks in 1K+ Cities" from iTunes App Store or Google Play to your mobile phone or tablet. The app turns your mobile device into a personal tour guide and its built-in GPS navigation functions guide you from one tour stop to next. The app works offline, so no data plan is needed when traveling abroad.

The Bahrain National Museum is the largest and one of the oldest museums in Bahrain. It is located near King Faisal Highway in Manama. The museum possesses a rich collection of Bahrain's ancient archaeological artifacts that covers more than 6,000 years of Bahrain's history. The museum complex includes three halls devoted to archaeology and the ancient civilization of Dilmun and another two halls that depict the culture and lifestyle of Bahrain's recent pre-industrial past. In 1993 the Natural History Hall opened. This hall features specimens of Bahrain's flora and fauna. Among the exhibits in the ancient history section is an actual burial mound, which was transported from its original site in the desert. Another feature is a tableau depicting a scene from the Epic of Gilgamesh. Old Koranic manuscripts, notes on astronomy and historical documents and letters are exhibited in the Documents and Manuscripts Hall. The building was designed by KHR Arkitekter of Denmark.
Image Courtesy of Wikimedia and Anthony DeCosta.
Sight description based on Wikipedia.
2

The Sail Monument is a memorial dedicated to one of Bahrain's most important industries, pearl diving. It overlooks the Sheikh Isa Bin Sulman Causeway and is surrounded by hotels, offices, banks and other diplomatic buildings. The monument is of two huge dhow sails that resemble two shells twisting around a pearl. It is especially beautiful at night when it is illuminated.
Image Courtesy of Flickr and dunzki.
3

When you see this monument located next to the Bahrain National Museum you may ask who is that upside down man and what is he doing? He is, in fact, a pearl diver searching for beautiful pearls in the Gulf. Bahrain is known as the “Pearl” of Gulf, which is why there are so many monuments dedicated to pearls. The Pearl Diving Monument stands on the quay and has the city skyline as a backdrop.
Image Courtesy of Flickr and dunzki.
4

The Beit Al Qur’an Mosque, or House of the Holy Koran, is a formidable structure built in the Classical Arabic style with sacred Koran suras on the walls. The mosque has a library and a rare collection of Islamic manuscripts. The edifice is crowned by a beautiful stained glass dome. The mosque is supported totally by public donations.
Image Courtesy of Wikimedia and DrFO.Jr.Tn.
5

The Beit Al Qur'an, or the House of Koran, is an Islamic museum built to accommodate a comprehensive and valuable collection of the Koran and rare manuscripts. The complex includes a mosque, a library, an auditorium, a school and museum that has ten exhibition halls. The museum houses an internationally celebrated collection of historic Koranic manuscripts from various parts of the Islamic world, from China in the East to Spain in the West. The manuscripts chart the progression of calligraphic traditions from the first century of the Islamic era to the present day. Visitors of all faiths are welcome.
Image Courtesy of Wikimedia and DrFO.Jr.Tn.
Sight description based on Wikipedia.
6

The La Fontaine Center of Contemporary Art is located in an old pearl merchant’s home, which is representative of 19th-century Islamic architecture. The center houses a restaurant, a spa, a gallery of international art and an open-air area, where performances are held under the starry sky. La Fontaine is a unique fusion of the traditional and modern in art and cuisine.

The Matam Ajam Al Kabeer Mosque is one of the most attractive religious buildings in Manama. It was first mentioned officially in 1881. The building is extraordinarily beautiful, with a brightly colored facade, traditional ornamentation and a grand dome. Many Iranian worshipers come here to pray. As Persians have arrived in Bahrain, they have brought with them the Baha'i Faith, which is practiced at this mosque.
Image Courtesy of Flickr and mormegil@cs.
8

Gold has always been an indicator of well-being and good taste. Manama's Gold City is a jewelry paradise located at the center of the city, which hosts more than 150 jewelry dealers. Here you will find jewelry made with natural pearls, diamonds, precious stones, silver, gold and platinum. In Gold City you will also find souvenir shops, watch stores and more.
Image Courtesy of Flickr and Parvin.
9

Bab Al Bahrain, or Gateway of Bahrain, is located in Customs Square in Manama's former central business district (CBD) and marks the main entrance to the Manama souq (marketplace). Designed by Sir Charles Belgrave, adviser to the Emir, and completed in 1945, Bab Al Bahrain once stood close to the water's edge. Due to extensive land reclamation in later years, it now takes more than 10 minutes to walk to the sea from Bab Al-Bahrain. The monument itself was refurbished in 1986 to incorporate Islamic architectural features. Today, the ground floor houses the tourist information office and a handicrafts shop. The monument consists of a huge arch, below which runs a road, which is often referred to as the entrance to the Manama souq.

The huge dome built on top of the Al-Fatih Mosque is made of pure fiberglass. Weighting over 60 t (60,000 kg), the dome is currently the worlds largest fibreglass dome. The marble used in the floors is Italian, while the chandelier is from Austria. Throughout the Mosque, there are calligraphy writings, in a very old type of style called Kufic. Al-Fateh now includes the new National Library which opened to the public in 2006. The mosque was built by the late Sheikh Isa ibn Salman Al Khalifa in 1987. It is named after Ahmed Al Fateh, the conqueror of Bahrain.

Image Courtesy of Flickr and abcdz2000.
Sight description based on Wikipedia.
10

Al Zamil Tower is a skyscraper in Fereej Al Fadhel located opposite the Bahrain Sheraton and just across from Government House. Built in 2005, the 21-storey tower covers 16,893 square metres of space and has parking facilities for 154 cars. It won the Aga Khan Award for Architecture in 2007.
Image Courtesy of Flickr and Harold Laudeus.
Sight description based on Wikipedia.
11

The two towers are linked via three skybridges, each holding a 225kW wind turbine, totalling to 675kW of wind power production. Each of these turbines measure 29 m (95 ft) in diameter, and is aligned north, which is the direction from which air from the Persian Gulf blows in. The sail-shaped buildings on either side are designed to funnel wind through the gap to provide accelerated wind passing through the turbines. This was confirmed by wind tunnel tests, which showed that the buildings create an S-shaped flow, ensuring that any wind coming within a 45° angle to either side of the central axis will create a wind stream that remains perpendicular to the turbines. This significantly increases their potential to generate electricity.
Image Courtesy of Flickr and dunzki.
Sight description based on Wikipedia.