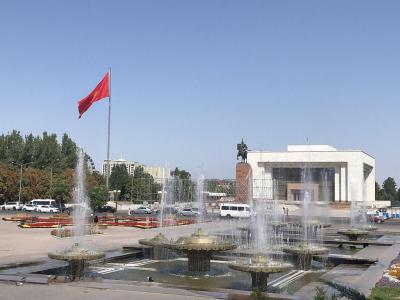 The square serves as a place for state events and celebrations. In 2008, it was the site of a memorial ceremony for world-renowned Kyrgyz writer Chinghiz Aitmatov. On March 24, 2005, the square was the site of the largest anti-government protest of Kyrgyzstan's Tulip Revolution. After several weeks of unrest throughout the country, over 15,000 people gathered early in the afternoon to protest the results of the 2005 parliamentary elections.
Image Courtesy of Wikimedia and Emil.akhmatbekov.
Sight description based on Wikipedia.

Want to visit this sight? Check out these Self-Guided Walking Tours in Bishkek. Alternatively, you can download the mobile app "GPSmyCity: Walks in 1K+ Cities" from iTunes App Store or Google Play. The app turns your mobile device to a personal tour guide and it works offline, so no data plan is needed when traveling abroad.

Set against the backdrop of Central Asia's Tian Shan mountains at an altitude of 800 meters above sea level, Bishkek, the capital of Kyrgyzstan, abounds in spacious squares, wide boulevards, marble-faced public buildings and multiple monuments reflecting the country's history including, primarily, the Soviet period. These and other prominent sights make up this tour and allow visitors to...  view more