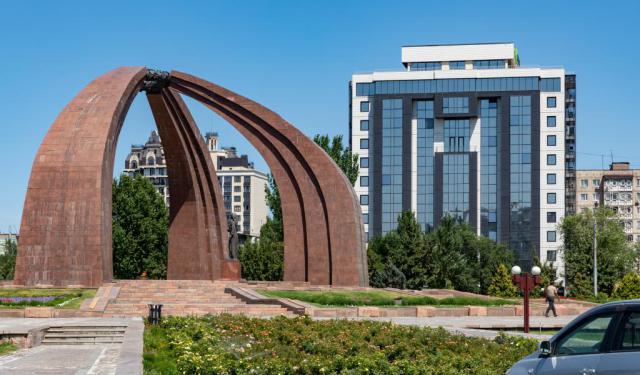 Set against the backdrop of Central Asia's Tian Shan mountains at an altitude of 800 meters above sea level, Bishkek, the capital of Kyrgyzstan, abounds in spacious squares, wide boulevards, marble-faced public buildings and multiple monuments reflecting the country's history including, primarily, the Soviet period. These and other prominent sights make up this tour and allow visitors to see Bishkek in its variety.
Image Courtesy of Wikimedia and Gilad Rom.
How it works: Download the app "GPSmyCity: Walks in 1K+ Cities" from iTunes App Store or Google Play to your mobile phone or tablet. The app turns your mobile device into a personal tour guide and its built-in GPS navigation functions guide you from one tour stop to next. The app works offline, so no data plan is needed when traveling abroad.

The square serves as a place for state events and celebrations. In 2008, it was the site of a memorial ceremony for world-renowned Kyrgyz writer Chinghiz Aitmatov. On March 24, 2005, the square was the site of the largest anti-government protest of Kyrgyzstan's Tulip Revolution. After several weeks of unrest throughout the country, over 15,000 people gathered early in the afternoon to protest the results of the 2005 parliamentary elections.

Image Courtesy of Wikimedia and Emil.akhmatbekov.
Sight description based on Wikipedia.
2

The National History Museum is the main museum in Bishkek. It is located in the very center of the city on the main square. It used to be called the Lenin Museum during the Soviet era. The museum now has a collection that tells the history of how Kyrgyzstan became an independent state. There are also exhibits dedicated to Lenin and Askar Akayev, Kyrgzystan's former president. The museum also highlights the folk traditions of Kyrgyz and its pre-Soviet history.
Image Courtesy of Wikimedia and t_y_l.
3

The Friendship Monument is located in a small square bearing the same name. It dates back to the Soviet era. According to some, this monument was founded in 1974 to celebrate the 50th anniversary of the USSR. Others claim it was created for the 100th anniversary of Kyrgyz joining the Russian Empire.
Image Courtesy of Wikimedia and DNikon.
4

The White House is the presidential office building in Bishkek, Kyrgyzstan. The White House was the site of riots during both the 2005 Tulip Revolution and the 2010 Kyrgyzstani riots. During the 2010 riots a fire broke out and damaged portions of the building and destroyed the hard copies of many government records.

The building is located on Chuy Avenue between the Philharmonia building and the Monument to the Martyrs of the Revolution. It is a seven story tall building built in Stalinist modern style, with the STO (Gosplan, Duma) building in Moscow as a model. In 1985, the building was built to be the location of the Communist Party's Central Committee headquarters. There is, "said to be" an underground complex under the Ala-Too Square connected to the White House via an underground series of tunnels.

Image Courtesy of Flickr and Adam Harangozó.
Sight description based on Wikipedia.
5

Panfilov Park is one of the most popular parks in the center of Bishkek. It is located near to a number of famous Kyrgyz monuments. The park is a fun, interesting place for kids of all ages. There are playgrounds, carousels and an observation circle. Parents will enjoy their time here as well!
Image Courtesy of Flickr and Francisco Anzola.
6

A monument to Lenin stands in the center of Bishkek, as it once did in the majority of cities, towns and villages located in the former Soviet Union. The statue depicts Lenin standing tall with his arm stretched, pointing to the "happy future". This monument is probably the only remaining statue of this famous revolutionary leader in Central Asia, and stands as a reminder of an important period in Kyrgyzstan's history.
Image Courtesy of Flickr and Vladislav Litvinov.
7

At the Frunze House-Museum you can learn more about Bishkek and the Soviet invasion of 1917. Mikhail Frunze was a Red Army general and a Bolshevik revolutionist. He successfully put down local rebellions after the revolution. Mikhail Frunze became a Soviet hero. The city itself carried his name for a period and became Bishkek only in 1991. The museum welcomes visitors on Tuesday to Sunday from 9:30 AM to 5:30 PM.
Image Courtesy of Wikimedia and DNikon.
8

Oak Park, or Dubovy Park as it sounds in Russian, is one of the best parks located in the center of the city. Enjoy exploring the extensive grounds of the park. Look for a fantastic rose garden and beautiful fountains, as well as many sculptures and monuments, most of which date back to the Soviet era. There is also an open-air art exhibit in the park where local artists sell their paintings and crafts.
Image Courtesy of Wikimedia and Adam Harangozó.
9

The Open Air Sculpture Museum is located in Oak Park in the center of Bishkek. There are some very strange figures here. The museum was established in 1984 on the 60th anniversary of the Kyrgyz Republic. The sculptures on display were created by artists from the former Soviet Union and were designed around the theme of “Peace and Labor”.
Image Courtesy of Wikimedia and Adam Harangozó.
10

The Gallery of Fine Arts is a very large gallery that displays the best of Kyrgyz art. There are numerous halls that feature a variety of art. You should especially visit the hall that exhibits traditional Kyrgyz folk art, portraits, applied arts and contemporary work from Russian and former Soviet republic artists. The traditional Kyrgyz embroidery exhibit is also worth a look. This exhibit showcases different hand-crafted items made by local women. There are also halls with Egyptian and Greek statues and artwork from India. The museum is open every day except Monday from 10 AM until 6 PM.
Image Courtesy of Wikimedia and Davide Mauro.
11

Bishkek Circus puts on many performances for kids. The circus is a popular form of entertainment for kids in former Soviet Union countries. There are clowns, acrobats, animals and more. The arena of the circus is brightly illuminated and fanfares play at the beginning of the show. Ice cream and other treats are sold here.
Image Courtesy of Wikimedia and t_y_l.
12

The Victory Monument stands appropriately enough on Victory Square. This memorial is dedicated to the victory of the Allies over Nazi Germany. The statue is of a woman, representing all the mothers and wives that had to wait for their sons and husbands to return home. National symbols, such as the Kyrgyz yort, also adorn the memorial. It is a breathtaking site, as it illustrates the costs of war in a very memorable way.
Image Courtesy of Flickr and Ninara.
13

Detsky Mir, or Baby Land Shop in English, offers all kinds of merchandise for kids, from games and school supplies to clothes and shoes. This type of shop once existed in every city in the former Soviet Union. There is a cafe with a playground in the shop. In Russian the cafe is called "Chudo Ostrov", which translates to wonderful island. The cafe offers European and Central Asian cuisine.
Image Courtesy of Flickr and Retinafunk.
14

ZUM is a large shop that used to be found in all cities of the former Soviet Union. This typical Soviet department store sells everything, from toiletries to new electronics, but if you go up to the top floor you will find local Bishkek souvenirs. These range from jewels to Bishkek rugs to pottery and more. There are also antiques that were sold during the Soviet era.
Image Courtesy of Flickr and Robert Heilman.
15

Ak Emir Bazaar is one of the most colorful markets in Bishkek. It sells mainly local food products. Here you will find interesting delicacies that you probably have never tasted. You can also buy more familiar items, such as roast chicken, honey products, pickled salads and more. There is also some Russian-style food like 'pirojkis', as well as exotic fruit and vegetables.
Image Courtesy of Flickr and neiljs.