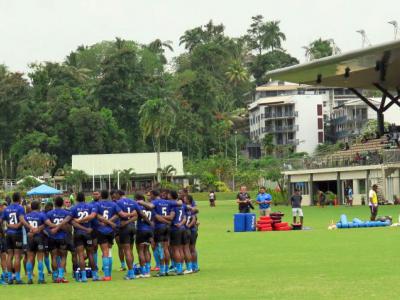 Albert Park was named for Prince Albert, the royal consort of Queen Victoria. Originally known as the Cricket Ground and Tennis Courts, it was a recreational reserve offered by merchants William Thomson and Samuel Renwick to the government as part of an inducement to move the capital from Levuka to Suva.

Albert Park has been the site of several historical events, but undoubtedly the most famous was as the ad hoc landing strip for Charles Kingsford Smith, who made the first aerial crossing of the Pacific — from Oakland, California to Brisbane, Australia — in 1928. The crew had never seen the proposed Suva landing place and did not know that a row of trees stretched across the middle of Albert Park.

Only the insistent urging of the Suva radio station manager, Robert Farquhar, persuaded the governor — against the wishes of the town authorities — to order the trees cut down and the ground leveled with cartloads of coral rock and sand, to accommodate the incoming plane. It worked. The Southern Cross had no brakes, but on the afternoon of June 5, 1928, with superb skill, Smith put the plane down in the park, with only feet to spare at the end as he swung the two-engine Fokker around almost at right angles and brought it to a stop.

By 2019, upgrades to Albert Park had transformed the venerable grounds into a modern sports complex. The level of the pitch was raised with new soil, the problem of flooding was solved by installing a modern drainage system, and the area was refurbished with high-quality sod, which vastly improved the surface of the playing field. New fencing around the periphery was also installed.

The park’s crowning glory was the construction of a massive grandstand that can seat up to 1,000 spectators and includes corporate lounges, VIP rooms, seating for the disabled, a control room and parking for 28 vehicles.

To get to the next landmark on our tour, the Grand Pacific Hotel, simply cross Victoria Parade.
Image Courtesy of Robert Kay.