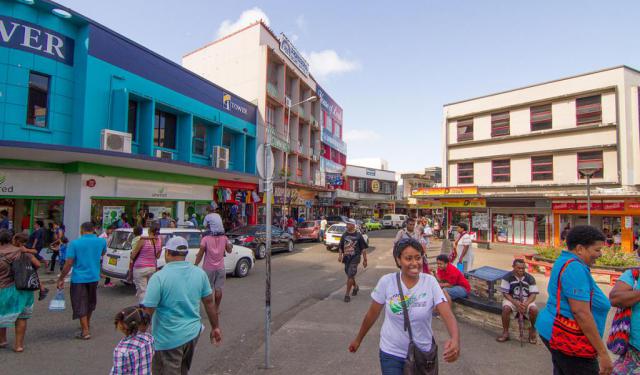 Image by Maksym Kozlenko on Wikimedia under Creative Commons License.

Suva, the capital and the largest city of Fiji, is a tropical paradise with enough natural beauty to surpass any man-made attractions. Still, the city's of broad avenues, lush parks and grand British colonial architecture are well worth checking out, notably the Fiji Museum, situated within the Victorian-era Thurston Gardens, featuring samples of traditional canoes, war clubs and tattooing items. Follow this orientation walk to explore the best of beautiful Suva.
How it works: Download the app "GPSmyCity: Walks in 1K+ Cities" from iTunes App Store or Google Play to your mobile phone or tablet. The app turns your mobile device into a personal tour guide and its built-in GPS navigation functions guide you from one tour stop to next. The app works offline, so no data plan is needed when traveling abroad.

The Sacred Heart Cathedral or simply Cathedral of Suva, is the name given to a religious building that is affiliated with the Catholic Church and is located in the Pratt Street in the City of Suva, the capital of the island nation of Fiji, specifically on the island of Viti Levu, in Fiji Central division.

Suva Cathedral was built in 1902 with sandstone brought from quarries near Sydney, Australia. Its architecture is inspired by the churches of Rome in Italy. The building is covered with ornaments and stained glass and has a crypt in the basement.

The temple follows the Roman or Latin rite and serves as the headquarters of the Metropolitan Archdiocese of Suva (Archidioecesis suvana) which was created in 1966 by Pope Paul VI by bull "Prophetarum voices". Not to be confused with the Church of the Sacred Heart in Levuka, which is Unesco heritage.

Image by Michael Coghlan on Flickr under Creative Commons License.
Sight description based on wikipedia
2

Fiji Museum is a museum located in the capital city's botanical gardens, Thurston Gardens. The museum houses an extensive archaeological collection dating back 3,700 years and relics of Fiji's indigenous cultural history. Also on display is the rudder of the HMS Bounty of mutiny fame. The Museum is a statutory body and is under the administration of the Fiji Museum Act and the Preservation of Objects of Archaeological & Palaeontological Interest Act. Fiji Museum was the host institution for the Pacific Islands Museums Association (PIMA) secretariat until 2006, when the secretariat transferred its base of operations to Port Vila, Vanuatu.

Albert Park can hold two rugby matches at one time. There’s also a hockey pitch located in the middle of the ground with a grandstand and a cafeteria. The annual hibiscus festival is also held here.

The park was the site of a landing by the Australian aviator Sir Charles Kingsford Smith during the first trans-Pacific flight from the United States to Australia in 1928. It was also the site of the first hoisting of the new national flag of Fiji on 9 October 1970.
Image by Jerrye & Roy Klotz, MD on Wikimedia under Creative Commons License.
Sight description based on wikipedia
4

Thurston Gardens are the botanical gardens of Fiji. They used to be known as the Suva Botanical Gardens but its name was changed in honour of the fifth Governor of Fiji, Sir John Bates Thurston, who was Governor from February 1888 to March 1897. Thurston Gardens is located in central Suva, between Albert Park and the Government House.

Thurston Gardens are built on the site of the original town of Suva that was burned in 1843 in one of the bloodiest fights in Fiji's history. The gardens were originally named Suva Botanical Gardens, but were renamed in 1976 in memory of Sir John Thurston. In 1913 the Gardens were reorganized and drains were laid underground. The avenues of 101 Royal Palms and 39 tree ferns were also planted.

The Clock Tower and band stand were constructed in 1918 in memory of the first mayor of Suva. The Fiji Museum, now occupies the building that was built in the Botanical Garden grounds in 1955.

The Fiji Museum is currently maintaining the gardens. Spread throughout the grounds are varieties of palms, gingers, water lilies and other local flora.
Image by User:Matthias Süßen on Wikimedia under Creative Commons License.
Sight description based on wikipedia
5

The Clock Tower is an impressive building and one of Suva's most prominent landmarks. It is located alongside Albert Park in the Old Parliament building, which housed government offices from 1939 to 1987. Construction of the Clock Tower was finished in 1905, and the building was dedicated to the memory of King Edward VII.
Image by Maseikula Niumataiwalu on Wikimedia under Creative Commons License.
6

The Ratu Sukuna Monument is a statue built in memory of the famous Fijian chief Ratu Sir Lala Sukuna. Throughout his life, he did more than any other governor of Fiji to further the development of his country. He was an able student, a brave soldier and an excellent statesman. Although he died before Fiji achieved independence from the United Kingdom in 1970, he influenced the course of Fiji’s history for many years to come.
Image by tamanijake on Flickr under Creative Commons License.
7

The Government Buildings in Suva are the offices of the executive wing of Government of Fiji. Built in the late 1930s, the Art Deco buildings house the Prime Minister of Fiji's offices, the High Court, and government ministries. Parliament was held here until the 1987 coups, and again since 2015; in the interim it met in a building on Battery Road in the Suva suburb of Muanikau.

The building is located across the street from Albert Park, bounded by Southern Cross Road, Gladestone Road, Thurston Street and Victoria Parade.

There are two statues located in the front of the building: Ratu Epenisa Seru Cakobau, Ratu Sir Lala Sukuna
Image by Stemoc on Wikimedia under Creative Commons License.
Sight description based on wikipedia
8

The Suva City Carnegie Library was built in 1909 and immediately became one of the most renowned structures in the city. The architecture is amazing and the building will impress you both inside and out. Book lovers can find a wide selection of rare books covering a range of topics here.
Image by bhaskarroo on Flickr under Creative Commons License.
9

Old Town Hall is an interesting landmark located in central Suva. This building features a great deal of ornamental iron. It has an auditorium, which was designed in the early 1900s and named after Queen Victoria. For many years, this building served as Suva’s Town Hall. Today it houses a couple of restaurants and the offices of Green Peace.
Image by jason_hindle on Flickr under Creative Commons License.
10

While strolling the streets of Suva, it's hard not to notice the piece of paradise known as The Triangle. This place is located at the intersection of three main streets: Victoria Parade, Renwick Road and Thomson Street. In the late 1800s The Triangle was the modern center of the city. Today this spot resembles a peaceful lagoon in the middle of the hustle and bustle of local traffic.
Image by Tim O'Shea on Wikimedia under Creative Commons License.
11

Suva is not a city with deep religious roots, which is why you will not see many religious buildings here. Nevertheless, some noteworthy places of worship line the streets of Suva. The city's churches and cathedrals are stunning and reinforce the saying that it's quality, not quantity that counts. Take this tour to discover Suva’s beautiful sacred places.