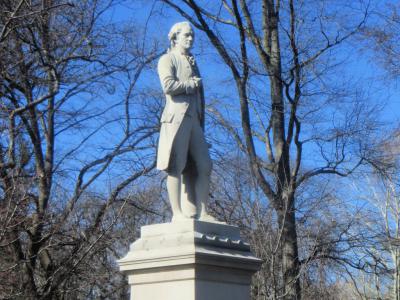 Central Park has quite a few interesting sculptures and statues, and one such monument is dedicated to an important figure in the U.S. history, Alexander Hamilton. This classic 19th-century era statue can be found near the Great Lawn. Unquestionably the most undervalued Founding Father, Hamilton is depicted standing firmly, dressed and posing in colonial attire (wig, ruffled collar, knickers, and buckle shoes), and appearing stately and dignified.

Appointed as the 1st United States Secretary of the Treasury on September 11, 1789, the statesman was a good friend of George Washington. He fought in the Revolutionary War, and was active in ending the legality of the international slave trade. Standing much taller than others in Central Park, the granite statue was gifted to the city by his son, John C. Hamilton in 1880.
Image Courtesy of Wikimedia and DE.